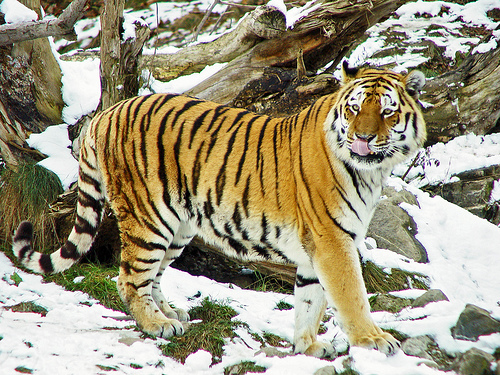 2010 is the year of the tiger, an Asian astrological sign known for its charisma and courageousness. Astrological tigers may be all around us, but two tiger sub-species have gone extinct since 1930, and many believe the South China Tiger is “functionally extinct” because it hasn’t been seen in 20 years. Even for the remaining five tiger subspecies—Sumatran, Bengal, Indochinese, Siberian, and Malayan—the prognosis isn’t good: the WWF recently announced that the 3,200 tigers living in the wild are among the most threatened creatures on Earth.

Wild tigers live in isolated pockets of jungle, usually inside wildlife refuges, in a handful of Asian countries. Tigers need a few things to survive: lots of prey like deer and pigs, water, and some dense vegetation. However, habitat encroachment has been epic in recent years and since 1900, tigers’ range has decreased by 95% (see a map here).

However, I doubt that these majestic animals will disappear entirely. Their size, beauty, and potential deadliness make them popular, and lucrative, zoo exhibits around the world. In China, thousands of the big cats live in cages on tiger “farms” where tourists can visit them and where (it’s been reported) tiger blood, bile, bones, paws, and other parts are harvested for the black market, for use in expensive traditional medicines. International regulations prohibit trafficking or selling any tiger parts, but China has lobbied for a suspension of the rule in the case of farmed tigers, arguing that the sale of legal tiger parts could reduce poaching and fund conservation efforts. So far, their appeals have been unsuccessful, and the black market in tiger parts continues to thrive. Like the Giant Panda, the tiger may go extinct in the wild, but its monetary value to zoos and the black market means it will likely be around for decades to come. To learn more about tigers and how to save them, check out the World Bank’s conservation program and comprehensive threat analysis here.