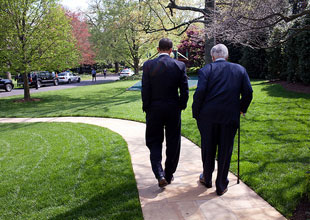 Most observers seem to think that Scott Brown, the Republican candidate, will be the next senator from Massachusetts and serve out the remainder of Ted Kennedy’s term. But as Josh Marshall writes, even if Martha Coakley ekes out a victory, today is a “critical gut-check moment” for President Barack Obama. Now that he’s facing political trouble—in Massachusetts of all places—how will the president react?

The reporting on Obama’s plans for the State of the Union address, scheduled for Jan. 27, suggest that the White House will double down on the kind of moves that have irritated liberals and demoralized his base. According to Politico, the president plans to unveil a budget that features “real fiscal austerity measures” that will “draw flak from both sides of the aisle”—code words for a contraction in government spending that left-leaning economists like Paul Krugman say will only add to the country’s economic woes. Over at the Atlantic, Marc Ambinder also warns of further disappointment for the left:

[I]f, through some combination of White House pressure and magic the House CAN pass the Senate health care bill within the next few days, the circumstances surrounding its passage will not redound to the benefit of Democrats. Liberals will be angry—and they’ll be even angrier at the White House’s austerity budget that’s due Feb. 1. And they’ll be even ANGRIER when they realize that the White House will redouble their efforts to make peace with Republicans on budgetary and spending issues.

Still, not everyone sees dark days ahead for liberals. Kevin picked out a different passage from the same Politico article:

“The response will not be to do incremental things and try to salvage a few seats in the fall,” a presidential adviser said. “The best political route also happens to be the boldest rhetorical route, which is to go out and fight and let the chips fall where they may. We can say, ‘At least we fought for these things, and the Republicans said no.'”

Kevin thinks showing “some fight” in the wake of a Massachusetts loss might turn out to be a “blessing in disguise.” And sure, such a strategy might help Obama. It may even save some Democratic seats come November. But will emboldened rhetoric help the White House actually enact any liberal policies? It’s no coincidence that the increase in “fight” is coming at the same time that it’s going to be increasingly hard for the administration to actually acheive anything of substance. Senators like Evan Bayh (D-Ind.) and Joe Lieberman (I-Conn.) are already suggesting that Obama should move towards “the center.” With Brown in office, Obama will have trouble doing the tough stuff. He’ll be turning to rhetoric—and turning rightwards on “budgetary and spending issues”—because he’ll have to. If this is a blessing, it’s pretty well disguised.