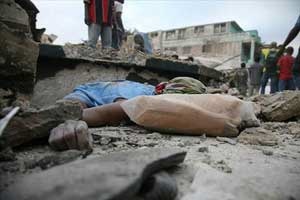 In the wake of the devastating earthquake, American eyes are again turned toward Haiti—something that only seems to happen when yet another disaster strikes, and never during the daily chaos and misery that plague the poorest country in the Western Hemisphere. I’ve spent a good deal of time in Haiti, reporting first on the repression under the Duvaliers, then on the rise of Jean-Bertrand Aristide’s popular movement, and then on the 1991 military coup that brought him down. I was there during the period of the 1994 military intervention that restored Aristide to power.

US interest in the country seemed to wane with the departure of American troops, and in the aftermath of September 11 and the Bush administration’s numerous adventures around the world, Haiti returned to its usual state of invisibility in Western eyes. Few people noticed a remarkable report that appeared in the New York Times in 2006, based in part on the analysis of former ambassador Brian Dean Curran, showing how US policy helped to destabalize Haiti in the years leading up to 2004, when Aristide was again forced out by armed rebels under an accused death squad leader. Written shortly before the election won by current president Rene Preval, Walt Bogdanich and Jenny Nordberg titled their story “Mixed U.S. Signals Helped Tilt Haiti Toward Chaos.” Here’s their account of the events following Aristide’s 2004 departure:

Haiti, never a model of stability, soon dissolved into a state so lawless it stunned even those who had pushed for the removal of Mr. Aristide, a former Roman Catholic priest who rose to power as the champion and hero of Haiti’s poor.

Today, the capital, Port-au-Prince, is virtually paralyzed by kidnappings, spreading panic among rich and poor alike. Corrupt police officers in uniform have assassinated people on the streets in the light of day. The chaos is so extreme and the interim government so dysfunctional that voting to elect a new one has already been delayed four times….

Yet even as Haiti prepares to pick its first elected president since the rebellion two years ago, questions linger about the circumstances of Mr. Aristide’s ouster—and especially why the Bush administration, which has made building democracy a centerpiece of its foreign policy in Iraq and around the world, did not do more to preserve it so close to its shores.

The Bush administration has said that while Mr. Aristide was deeply flawed, its policy was always to work with him as Haiti’s democratically elected leader. But the administration’s actions in Haiti did not always match its words. Interviews and a review of government documents show that a democracy-building group close to the White House, and financed by American taxpayers, undercut the official United States policy and the ambassador assigned to carry it out.

As a result, the United States spoke with two sometimes contradictory voices in a country where its words carry enormous weight. That mixed message, the former American ambassador said, made efforts to foster political peace “immeasurably more difficult.” Without a political agreement, a weak government was destabilized further, leaving it vulnerable to the rebels.

Mr. Curran accused the democracy-building group, the International Republican Institute, of trying to undermine the reconciliation process after disputed 2000 Senate elections threw Haiti into a violent political crisis. The group’s leader in Haiti, Stanley Lucas, an avowed Aristide opponent from the Haitian elite, counseled the opposition to stand firm, and not work with Mr. Aristide, as a way to cripple his government and drive him from power, said Mr. Curran, whose account is supported in crucial parts by other diplomats and opposition figures. Many of these people spoke publicly about the events for the first time.

Mr. Curran, a 30-year Foreign Service veteran and a Clinton appointee retained by President Bush, also accused Mr. Lucas of telling the opposition that he, not the ambassador, represented the Bush administration’s true intentions. Records show that Mr. Curran warned his bosses in Washington that Mr. Lucas’s behavior was contrary to American policy and “risked us being accused of attempting to destabilize the government.” Yet when he asked for tighter controls over the I.R.I. in the summer of 2002, he hit a roadblock after high officials in the State Department and National Security Council expressed support for the pro-democracy group, an American aid official wrote at the time.

The International Republican Institute is one of several prominent nonprofit groups that receive federal funds to help countries develop the mechanisms of democracy, like campaigning and election monitoring. Of all the groups, though, the I.R.I. is closest to the administration. President Bush picked its president, Lorne W. Craner, to run his administration’s democracy-building efforts. The institute, which works in more than 60 countries, has seen its federal financing nearly triple in three years, from $26 million in 2003 to $75 million in 2005. Last spring, at an I.R.I. fund-raiser, Mr. Bush called democracy-building “a growth industry.” These groups walk a fine line. Under federal guidelines, they are supposed to nurture democracy in a nonpartisan way, lest they be accused of meddling in the affairs of sovereign nations. But in Haiti, according to diplomats, Mr. Lucas actively worked against President Aristide.

While it can be counted on not to engage in these kinds of deadly shenanigans, the Obama administration hasn’t taken much meaingful action on Haiti in the past year. It did pull back on some of the harshest deportation policies of the Bush years, which affected Haitians fleeing their country’s shores. But it has implemented few of the recommendations, for example, put out by the Haitian Lawyers Leadership Network after Obama’s inauguration, which included canceling debts and increasing trade.

For the most part, Europe and the United States have continued to sit by as Haiti has grown poorer and poorer. When I was there you could find the children just outside Cite Soleil, the giant slum, living in the garbage dump, waiting for the US army trucks to dump the scraps left from the meals of American soldiers. There they stood, knee deep in garbage, fighting for bits of food. As for the old, they people every street, gathering at the Holiday Inn at Port au Prince in wheelchairs, waiting at the doorway in search of a coin or two. They have no social safety net. And nobody with any money—no bank, no insurance company, no hedge fund, no mutual fund—ever makes any serious investment in the country.

It is hard to imagine what a magnitude 7 earthquake might do to a city that on any ordinary day already resembles a disaster area.  Today, compassionate Americans will wince at the photos, then pick their way among the foundations which offer alms to the Haitian poor. Here is one unlikely proposal to help Haiti, taken from Juan Cole’s email listserv this morning:

Memo to Obama on Haiti: “It’s reported that Goldman Sachs, Morgan Stanley and JPMorgan Chase combined have set aside $47 billion for bonuses,” says an NPR account, according to Cole. “Haiti’s annual gross domestic product in nominal terms is about $7 bn. a year. Seize the bonuses. Send them to Haiti.”

It’ll never happen, of course. But if there were any justice in the world, it would.