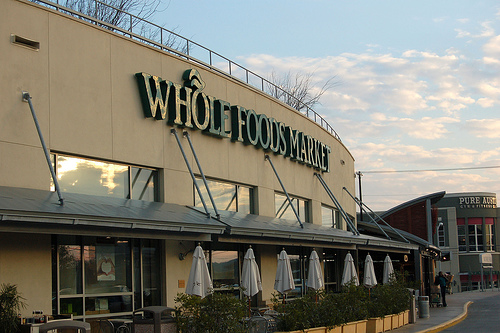 Earlier this week I pondered whether Whole Foods, or more specifically, its CEO John Mackey, is bad for the planet. Mackey’s latest comments questioning whether mankind is warming the planet prompted the piece, but I also looked at some of the greater questions about just how much, if anything, Whole Foods is doing to back up its green image. Well, low and behold, a study of grocers and their sustainability efforts documents just how little the company actually does when it comes to climate and related environmental issues.

Released in December 2008, the study from sustainable business group Ceres assesses what 63 companies are doing to prepare themselves to face the challenge of climate change, with a focus on board oversight, management execution, public disclosure, greenhouse gas emissions accounting and strategic planning and performance. Whole Foods earned a pitiful 27 score on the assessment (out of a possible 100)—flunking in basically every category.

Whole Foods’ climate change strategy is focused almost entirely on renewable energy purchases only. Th e company has purchased 1.2 million MWh hours of wind-based renewable energy credits (serving as carbon off sets for 100 percent of the electricity used in all of its stores), installed solar panels on nine stores, and converted its truck fleet to bio-diesel fuel. However, Whole Foods has not publicly disclosed a greenhouse gas (GHG) emissions inventory or emissions reduction targets.

Whole Foods was given a zero on board oversight, and only an 11 on management’s execution of a sustainability strategy. Whole Foods neither accounts for nor publicly discloses its emissions. As of the date of the report, the company didn’t have emissions goals or plans in place for reducing emissions. Since that report was released, the company has taken on some additional energy-related commitments, but it doesn’t appear to have changed much in the other areas.

Ceres also rated United Kingdom-based grocery giant Tesco, which scored a 78. The grocer has been among the most aggressive companies in the UK on climate, employing a carbon labeling system and even using expired meat to generate electricity.

US-based Safeway also scored significantly higher than Whole Foods, at 48. Safeway doesn’t get too much attention for its sustainability efforts, but it was the first retailer to join the Chicago Climate Exchange and the California Climate Action Registry, and has launched a comprehensive greenhouse gas reduction and sustainability initiative.

All of this just highlights the fact that Whole Foods, in reality, is far from the green grocer many customers imagine it to be. Kooky, libertarian, climate-change-denying CEO aside, the company just isn’t making the grade when it comes to climate change.