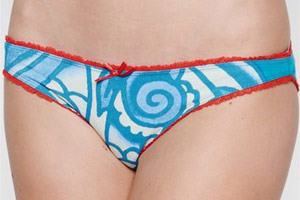 What’s wrong with your vagina? If you answered “nothing,” you’re probably wrong. According to the beauty-industrial complex, it’s ugly, and it smells bad. But don’t worry—there’s nothing that money can’t fix.

In the seventies, Massengill tried to marry feminism and its vaginal deodorant spray (“With Hexachlorophene”) in an ad that declared the product to be “The Freedom Spray.” It was “…the better way to be free to enjoy being a woman. Free from worry about external vaginal odor.” Because you’re going to need that time you used to spend worrying about your vaginal odor to flirt your way through the glass ceiling. Oh, and Hexachlorophene? It’s a disinfectant that can be lethal when absorbed through the skin. In 1972, it was added to baby powder in France due to a manufacturing error and killed thirty-six children.

In case you think vaginal deodorant is a relic of the past, just take a trip to the drug store. (I did, and I took notes. The staff of my local Walgreens is convinced that I’m both very thorough and that my vagina smells really bad.) There are several kinds of vaginal deodorants still for sale (Walgreens even manufactures a generic version). You can buy scented vaginal suppositories called Norforms in Island Escape and Summer’s Eve Deodorant Spray in Island Splash. (Norforms contain something called Benzethonium chloride, which is also used as a hard surface disinfectant for fruit and classified as a poison in Switzerland. Exotic!) And you can buy FDS (Feminine, Discreet, Sensual) Spray (“For the woman who cares.”) in a myriad of scents including Sheer Tropics and Fresh Island Breeze.

Because if you really cared, you’d make your vagina smell like a poisonous island.

2. Problem: Your Vagina Is Dirty

Douching, the act of forcing a mixture of fluids up into the vagina with a tube and pump, was first promoted as a form of birth control (it doesn’t work) and has continued to be used for vaguely medical reasons: to prevent STIs (sexually transmitted infections), to clean the vagina after menstruation and, of course, to rid it of that disgusting vagina smell. Douching has been repeatedly discouraged by the medical community, which not only doesn’t attribute any health benefits to the act, but believes that it can actually harm women. A government Web site run by the U.S. Department of Health and Human Services discourages douching by answering a series of hypothetical questions, one of which is: “My vagina has a terrible odor, can douching help?” The answer: No. Get thee to a doctor.

Despite health concerns, manufacturers still churn out vaginal douches. Pick up a box of Summer’s Eve Douche, and you’ll find warnings that douching has been associated with PID (Pelvic Inflamatory Disease), ectopic pregnancy and infertility. Right next to the suggestion that women douche after their menstrual period, after using contraceptive jellies and creams and to “clear out any vaginal secretions.” So basically, any time your vagina isn’t as dry as a British sitcom.

3. Problem: Your Vagina Is Too Loose

Let’s face it. Nature really screwed up when it made the vagina. Never mind that that it accommodates the birth of a child or that it’s fundamentally better designed than male genitalia. (Who wants to carry their most sensitive reproductive organs on the outside?) While nature was busy dishing out things like multiple orgasms, it forgot to make vaginas vice-tight. Luckily, plastic surgeons have stepped in to put an end to womankind’s collective suffering.

Laser Vaginal Rejuvenation is a trademarked phrase that refers to a practice developed and popularized by Dr. David Matlock, who’s made several appearances on the E! channel’s plastic surgery reality show, Dr.90210. Matlock and other doctors who carry out LVR claim that the $4,000 to $20,000 procedure makes women’s vaginas tighter, thus increasing sexual pleasure.

But many doctors disagree. The American Urogynocology Society won’t endorse it. And the American College of Obstetricians and Gynecologists cautioned in a 2007 statement that women seeking “designer vaginas” should be “informed about the lack of data supporting the efficacy of these procedures and their potential complications, including infection, altered sensation, dyspareunia, adhesions, and scarring.” Sexy!

4. Problem: Your Vagina Is Ugly

If your vagina is tight enough (and let’s face it, it’s probably not) you’ve still got to deal with the labia. And by “deal with,” I mean remove. Labiaplasty drastically reduces the labia, the protruding lips that surround the opening of the vagina. Why would you want to do this? Because your labia are “unequal,” “elongated,” “large,” “irregular,” “floppy,” and “unfeminine.” These are just some of the unflattering adjectives bandied about on the Web sites of surgeons who offer this procedure. Luckily, with the use of lasers and scalpels, your vagina can be made “prettier,” “better proportioned,” “youthful,” and achieve “the true Playboy aesthetic look.” How much will it cost you to make your labia proportional and feminine? About $5,000 or more.

If your partner is reluctant to give you oral sex, it’s not because of pervasive cultural belief that cunnilingus is complicated to the point of being impossible and that vaginas are inherently icky (thus the need to uncomplicate them and un-ickify them with, oh, say, labiaplasty) it’s because your vagina tastes bad. Enter the Linger Internal Vaginal Flavoring, or Altoids for your vagina. Linger assumes you already feel bad about your nether regions, stating on its Web site that the mint-flavored pill “decreases self-consciousness” and tosses out the unattributed statistic that 72 percent of women feel self conscious about their taste and odor. Dubious marketing practices aside, the Linger mint isn’t just a harmless, if asinine, oddity. Mother Jones magazine did some digging into the origins of Linger and discovered that the vagina mint is no different from a regular mint. In other words, it’s made out of sugar. And putting sugar-based mint directly into your vagina is a recipe for a mint-flavored yeast infection.

6. Problem: Your Vagina Is the Wrong Color

Many women are under the impression that it’s OK to have a vagina colored vagina. They’re wrong, of course. They should be pink, and exceptionally so. What’s a woman with a vagina colored vagina to do? Bleach it. Accomoclitic Laser and Wax Studio in Lakewood, Colorado, purveyors of an anal bleaching product called “Pink Wink,” also sell something called Bleach Babe, a cream that promises to do away with the “natural discoloration surrounding the exterior of the vagina.” Bleach Babe contains Kojic acid, the same ingredient that keeps salmon meat pink. South Beach Solutions sells a similar lightening product with Sodium hydroxide, which can also be found in drain decloggers and septic tank cleansers.

If bleaching fails to render your vagina the color of a Barbie Dream House, you can try My New Pink Button, billed as a “Genital Cosmetic Colorant that restores the “Pink” back to woman’s genitals.” Because vaginas that aren’t vibrantly pink are old and sad. My New Pink Button is meant to be painted onto the vagina (it comes in powder form and must be scooped up with a moist Q-tip like device) and lasts 48 to 72 hours. After which, one supposes, users must reapply in order to maintain the youthful status of their genitals.