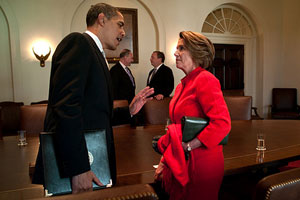 After more than a year of partisan and policy combat, the epic battle for health care reform may come down to an internal Democrat party tussle: whether or not House Democrats yield to President Barack Obama and accept a tax on high-end insurance plans.

After the Democrats in the House and the Senate passed different versions of health care legislation, several critical matters had to be worked out, including how to finance the reform. The House bill called for a surtax on the wealthiest Americans, The Senate measure included a tax on so-called Cadillac plans. This led to a contentious intra-party squabble. A few weeks ago, House Speaker Nancy Pelosi told several columnists (including me) that this excise tax has “no support” among House Democrats and that “the easiest thing is just to get rid of the whole excise tax.”

Yet on Monday, the president released—finally—his own health care proposal, which essentially is based on the Senate measure, with a few changes. And on the excise tax, he sided with the Senate. But he wants it tweaked so that it kicks in 2018, not 2013, and hits fewer plans. His proposal calls for raising the threshold for this tax from $23,000 in premiums for a family to $27,500.

Obama’s reforms address some of the complaints from House Dems—but not their fundamental gripe: the tax is bad policy and bad politics. Rep. Jerrold Nadler, (D-NY), who has led the charge against the excise tax, contends that a tax imposed on high-cost plans would likely not cause insurers to become more efficient and reduce costs (the supposed intent) but to cut back on benefits—and employees will end up with higher deductibles and co-payments as a result. Such a development, Nadler adds, will “violate Obama’s promise that if you like your plan, you can keep it.” Nadler also fears an excise tax is “political poison” because it will hit blue-collar workers (unionized or not) who have managed to obtain high-end health plans. “We lost the Reagan Democrats in the 1970s and 1980s,” he says, “because they came to believe that liberals wanted to benefit other people—the blacks, the Latinos—at their expense. We’ve just gotten them back. And now we’re saying to working people, we have to insure other people at your expense. This will destroy the Democratic Party and progressive politics for 30 years.”

At that meeting with columnists a few weeks ago, Pelosi estimated that at most there were 20 Democrats in her caucus who might support an excise tax. The White House appears to be banking on a wholesale conversion of House Dems. But it’s unclear whether Obama’s alterations to the tax—which also include not counting dental and vision benefits as taxable and easing the tax for firms with higher health-care costs due to the age or gender of their employees—will win over Democrats on the House side. According to White House press secretary Robert Gibbs, the White House did not brief the House Democrats regarding its intentions on the excise tax until after the plan was devised. And during a White House conference call about the overall proposal, economic aide Jason Furman was asked if the administration had attempted to work out an excise tax deal with the House Democrats before releasing the plan. He replied that “everyone would appreciate it” if the Obama proposal led to lower premiums. In other words, no.

The immediate reaction from House Democrats on Monday was mixed. Rep. Gerry Connolly (D-VA) says, “”I still don’t like the excise tax but I think again the President listened to critics and tried to respond. He significantly increased the threshold—both the individual and family threshold—and he pushed out to 2018 when it would kick in. Those are very substantial concessions to those of us who are uncomfortable with the approach and I think we need to give him a fair shake at looking at that and seeing if that would work.” Rep. Lynn Woolsey (D-CA), the co-chair of the House progressive caucus, was non-committal. “It appears that the President has reached 80 percent towards the House,” she notes, but adds “there’s absolutely no detail.”

It appears that the White House may be quasi-sticking it to the House Democrats. On other fronts, Obama’s proposal did more to render the Senate bill more to their liking—by boosting provisions that will make insurance more affordable for families and individuals, by strengthening insurance protections for consumers, by dumping the Nebraska sweetener, and by setting up a new federal authority that will help states regulate insurance premiums. (The Obama proposal says nothing about the difference between the House and Senate bills concerning how far to go in restricting funding for plans that could include coverage of abortions.) But the White House is saying the House Ds will have to swallow the excise tax in some form.

That could bring the Democratic Party to a dramatic Tarantino-like stand-off. Can the House Dems accept the modified excise tax as the price of passing health care reform? Will they balk and force the White House and the Senate Dems to yield? Or will the Cadillac crash into a ditch and explode? For health care reform to become law, someone in the Democratic Party is going to have to blink.