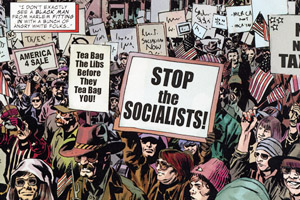 President Obama may be secretly plotting to declare martial law, but the Tea Partiers now face a more immediate threat: Captain America. Conservative blogger Warner Todd Huston has checked out issue 602 of the long-running series and concludes that Marvel Comics is “making patriotic Americans into [its] newest super villains.” The offending storyline finds Captain America and his African-American sidekick the Falcon in Idaho, where they encounter a Tea Party rally. They then scheme to infiltrate the antitax protesters as a way to get to their real target, a militia group known as the Watchdogs. The Falcon is skeptical: “I don’t exactly see a black man from Harlem fitting in with a bunch of angry white folks.” It’s not the first time the Star Spangled Avenger has revealed his secret identity as a big-government liberal. Back in the ’80s he battled Ronald Reagan when the Gipper turned into an underpants-wearing lizard man. And more recently, he met secretly with Obama to offer his services.

Huston complains that the new plotline portrays the Tea Partiers as a bunch of crazy racists. Marvel Comics editor-in-chief Joe Quesada has tried to dodge the criticism by insisting, unconvincingly, that the antitax folks weren’t even meant to be Tea Partiers, just a “generic protest group.” As for Marvel’s decision to portray the not-really-Tea Partiers as entirely white, The Stranger‘s Paul Constant quips, “An all-white teabagger crowd is probably the most realistic thing going on in that issue of Captain America.” Quesada also suggests that upset readers hold their outrage while the plot unfolds, hinting that exciting stereotype-shattering plot twists lie ahead. So hang on to your tea bags.