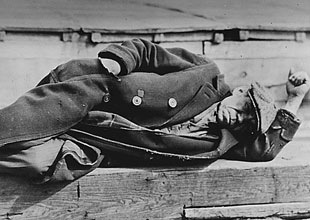 As of Sunday, unemployment benefits will officially end for hundreds of thousands of Americans, thanks to maneuverings by Senate Republicans to prevent a vote that would have extended those benefits. Unless the extension is passed soon, some 1.1 million of the nation’s unemployed will see their unemployment benefits expire in the coming month, and 5 million will lose benefits by June.

The House finally voted to extend benefits on Thursday, after several days of stalling and posturing. But in the Senate, the measure was blocked by Kentucky’s Jim Bunning. Politico reported that late into Thursday night, Bunning held out against repeated Democratic attempts to pass the extension by unanimous consent. In response to entreaties from colleagues across the aisle, other Republican senators rose to defend Bunning’s right to obstruct the vote, and Bunning himself was heard to utter, “Tough shit.”

Bunning said he wanted to see the cost of the benefits offset by other savings, to keep from adding to the deficit. But earlier in the week, Nevada Republican Congressman Dean Heller offered another objection to extending unemployment benefits: He believes it might create a nation of bums.

Think Progress relayed Heller’s remarks, which were made at a Republican Party function in Elko, Nevada, and reported in the local paper:

Heller said the current economic downturn and policies may bring back the hobos of the Great Depression, people who wandered the country taking odd jobs. He said a study found that people who are out of work longer than two years have only a 50 percent chance of getting back into the workforce.

“I believe there should be a federal safety net,” Heller said, but he questioned the wisdom of extending unemployment benefits yet again to a total of 24 months, which Congress is doing. “Is the government now creating hobos?” he asked.

Heller doesn’t seem bothered by the fact that he hails from a state with one of the nation’s highest unemployment rates–now more than 13 percent–as well as its highest foreclosure rate. In his speech, he managed to blame everything on the Democrats. “Six percent of Americans believe the stimulus package created jobs. More Americans believe Elvis is still alive,” he said. Never mind that the extended unemployment benefits Heller derided are in fact among the most effective components the stimulus package, according to the Congressional Budget Office, producing  $1.90 in growth for every $1 spent.

What makes Heller’s statement really stupid, of course, is that people could become hobos if Congress doesn’t extend unemployment benefits, rather than if they do. Modest as they are, these weekly benefits are what’s keeping thousands–and perhaps millions–of families out of  poverty. The benefits that expire first are for people who have been out of work the longest, and are most likely to be living close to the edge already.

The same is true for the other social safety net programs that Republicans tend to despise. For example, without Social Security, according to the Alliance for Retired Americans, ”55% of severely disabled workers and their families would live in poverty; 47% of elderly households would live in poverty; another 1.3 million children would fall into poverty; and 2.4 million grandparent-headed households caring for 4.5 million grandchildren would be deprived of [their] most important source of income.” Yet Social Security, too, has long been under attack by conservatives–a position that’s lately gained bipartisan ground, as reflected in Obama’s bipartisan “debt commission,” which is aimed at reducing entitlements.

The heydey of hobos was during the Great Depression, before the New Deal began to weave the social safety net. If Nelson and his fellow Republicans want to see Americans riding the rails, living in tent cities, and lining up at soup kitchens (even more than they already are), all they have to do is keep tearing that safety net apart.