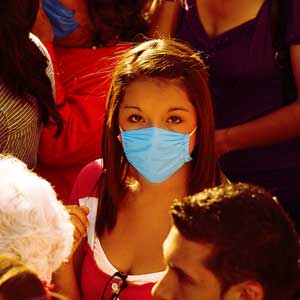 One component of comprehensive health care reform that has been notably lacking from the drawn out legislative discussions is access to paid sick leave. In the US—the only industrial nation where workers are not guaranteed paid sick leave for short-term or long-term illnesses—39 percent of workers do not recieve paid sick days. A new briefing paper released today by the Institute for Women’s Policy Research (IWPR), which links the spread of the virulent H1N1 flu to a lack of paid sick days, makes a compelling case for why that should be changed.

“Employees who attended work while infected with H1N1 are estimated to have caused the infection of as many as 7 million coworkers,” said Pennsylvania State University Professor Robert Drago, one of the authors of Sick at Work: Infected Employees in the Workplace During the H1N1 Pandemic [PDF], in a statement accompanying its publication. Combing through data on rates of illness and work attendance from the US Centers for Disease Control and Prevention and the Bureau of Labor Statistics, Drago and his coauthor Kevin Miller found that, of the 26 million working Americans who may have been inflected with swine flu in 2009, nearly 8 million continued to work while they were infected. Although most government employees receive paid sick days, the majority of Americans work in the private sector where only three out of five workers have access to any paid time off when they are sick. “Workers without paid sick days must choose whether to go to work sick or lose pay, a choice that many can’t afford to make,” Miller noted.

Presenteeism, attending work while ill, is an especially troubling phenomena in a time when climate change is likely to increase global outbreaks of infectious diseases. While passing a comprehensive climate bill is still the most important step Congress can take to prepare the US for climate change’s effects, the IWPR report also makes clear the need to make paid sick leave universal. One bill to do just that—the Healthy Families Act—was introduced by the late Sen. Ted Kennedy (D-Mass.) last May. Like the prospect of universal health care, which Kennedy championed his entire career, the paid sick leave bill is also languishing in congressional limbo.