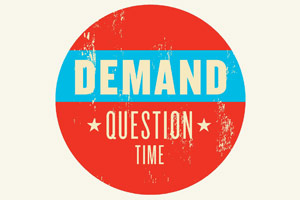 Last Friday afternoon, President Barack Obama and House Republicans made history. At the GOPers’ issues retreat in Baltimore, the president fielded sharp questions from the Republican legislators on critical issues: health care reform, taxes, the budget, the stimulus, energy, government transparency, earmarks, and other matters. The exchanges, broadcast live on the three cable news networks (with Fox News cutting away in the middle), were substantive and civil. The session—a far cry from the soundbite sallies of conventional political discourse—was gripping to watch. (You can see the video here.) This was indeed change.

On Twitter, journalists and citizens who were viewing the event immediately started sharing their amazement (in 140-character messages). Inevitably, a hashtag was born: #questiontime. This was a reference to the British practice under which the prime minister regularly appears before members of Parliament and answers their queries. (For you non-Twitterers, a hashtag is essentially a subject heading used to group tweets related to a particular and often popular topic.) Seeing that others on Twitter were jazzed by this American version of Question Time, I noted in repeated tweets that citizens and journalists should demand regular public and televised encounters between the president and the opposition party. Less than a week later, on this morning, a bipartisan group of bloggers, commentators, politicos, and Internet advocates—with a combined readership in the millions—has launched an online campaign urging President Obama, GOP House leader John Boehner and Republican Senate leader Mitch McConnell to make Question Time—televised and webcasted—a regular feature of American democracy. You can join this call at DemandQuestionTime.com. Let me tell you how the campaign came together.

As I was tweeting during the Obama-GOP Q&A, Micah Sifry, a co-founder of TechPresident.com, a cross-partisan group blog covering the intersection of politics, governance, and technology, sent me a direct message on Twitter: “you write the language for an online petition for institutionalizing #questiontime and we’ll push it out.” I’m a journalist, not an activist, but I thought starting a crusade for better political debate could be worthwhile. The next day, I sent Sifry a draft.

This was a rather diverse collection. It’s hard to imagine all of us agreeing on anything (except perhaps John Edwards’ future in politics). But we had an idea that transcends ideology—and cable-talk squabbling and blogosphere bickering. On Sunday evening, a group of endorsers worked on a Google document of a shortened version of my original draft. Sharing ideas via email, we quickly resolved any disagreements. (Should we demand that regular Question Time be a “part” or a “feature” of American democracy? What would William Strunk Jr. say?) It was encouraging to see people of different political bents collaborating so smoothly. It was a sign this was indeed a compelling idea. Moffo found a designer who cooked up a nifty logo: a campaign-style button declaring, “Demand Question Time.”

There was one glitch. At first, the plan was to post the petition on a particular social change website. But conservative members of our ad hoc group pointed out that this site tends to promote liberal causes and that could scare off potential conservative endorsers and signers. They were right. The libs agreed another option was needed. And within a day, Sifry created a stand-alone page for the petition.

So check it out. If you agree with this wide-ranging group of initial endorsers, please sign the petition, blog about it, talk about it, tweet about it, Facebook about it, Gchat about it, email about it, and send up smoke signals about it.

None of us are naive and believe that implementing Question Time will cure what ails our country and our political process. We do realize that if QT does become a Washington routine, politicians and their aides will do what they can to game it to their advantage. (On Monday, White House press secretary Robert Gibbs said that Obama has accepted an invitation to speak to the Senate Republicans—without saying whether the session would include questions and be televised. And on Wednesday morning, Obama was scheduled to address Senate Democrats at their own issues conference and take questions, with the event open to the press.) There may well be attempts to institutionalize Question Time in a fashion that renders it nothing more than a canned replay of pre-existing spin. But even though there are problems with the presidential debates—which have been taken over by the political parties and a corporate-sponsored commission—those events still have value.

As we witnessed last week, there was something riveting and moving about political opponents squaring off for an unfettered and unmoderated discussion of the challenges that face the nation. Though nothing was resolved in terms of policy and legislation, this was a moment of optimism. Yes, we can…have a reasonable political debate, without extreme rhetoric or name-calling. Lousy debate will never lead to good policy; good debate might.

If you want more Question Time—even if only for its entertainment value—you can saddle up with dozens (and maybe it will turn into hundreds, thousands, and millions) of your fellow Americans in calling on our elected representatives to show us their best stuff on a regular basis. Read—and sign—that petition here.

Update: I asked Bill Burton at Wednesday’s White House press briefing whether Obama would commit to holding regular Q&As with the GOP. He essentially said no, arguing that Friday’s session worked because of its “spontaneity.”