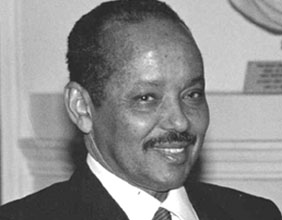 Supporting an alleged war criminal’s bid to evade accountability is surely not a popular stance. But when the Supreme Court took up the case of Somali General Mohamed Ali Samantar last fall, an odd coalition of defenders emerged. Among them were the government of Saudi Arabia, various pro-Israel groups, and three former US attorneys general. At stake is whether foreign officials can be sued in US courts for human rights abuses, or whether they are protected by a swath of immunity that shields them from answering for even the most heinous acts. Supporters of Samantar’s position contend that if the Supreme Court rules against him, it could leave officials from Saudi Arabia, Israel, the US, and elsewhere vulnerable to an avalanche of lawsuits. And the case raises major foreign policy questions, particularly as the Obama administration wages an aggressive fight against terrorism around the world.

The case is the first ever to target a member of the brutal regime of Somalia’s late dictator Mohammed Siad Barre. Samantar served as his defense minister and later prime minister, and he oversaw the country’s armed forces as they engaged in a litany of human rights violations. “He was the dictator’s enforcer,” says J. Peter Pham, the director of the National Committee on American Foreign Policy’s Africa Project. Samantar moved to the US in 1997 and for years has battled a lawsuit by alleged victims of the regime’s abuses—who collectively tell of torture, rape, extrajudicial killings, wanton imprisonment, and the abduction of family members who were never heard from again. Samantar’s lawyers argue that he’s immune from such suits under the Foreign Sovereign Immunities Act (FSIA), a 1976 law that, with some exceptions, protects countries (and any “agency or instrumentality” of those nations) from being sued in US courts. The high court will consider whether or not Samantar’s claim of immunity is valid when it hears oral arguments on March 3.  (An attorney for Samantar did not respond to an interview request.)

Samantar’s defenders—along with officials from countries with questionable human rights records—have cause to be anxious about how the Supreme Court rules in this matter. In the past, attempts (unsuccessful thus far) have been made to sue ex-Israeli officials in American courts for their role in military campaigns that caused civilian casualties. The case makes the Saudis tense because of their experiences fending off a spate of lawsuits accusing Saudi officials, nonprofits, and other entities of complicity in the September 11th attacks. These concerns also hit a little closer to home, given, among other things, the Bush administration’s controversial interrogation and rendition policies. In 2004, Maher Arar, a Syrian-born Canadian citizen who was detained in the US and rendered to Syria, where he alleges he was tortured, sued Attorney General John Ashcroft and other US officials—using one of the same statutes that Samantar was initially taken to court under. The case was dismissed by an appeals court, but earlier this month Arar petitioned the Supreme Court to review the decision.

The San Francisco-based Center for Justice and Accountability (CJA)—an organization that targets human rights violators and which has won judgments against Haitian death-squad leader Emmanuel “Toto” Constant and other war criminals—first sued Samantar in 2004. The Center represents a handful of plaintiffs who say they or their family members experienced a range of abuses under Siad Barre’s rule. One is Bashe Abdi Yousuf, who in November 1981 was seized by agents of Somalia’s National Security Service. His interrogators subjected him to a series of brutal tactics, from waterboarding and electric shocks to a painful torture method dubbed “the MiG.” It consisted of binding a detainee’s hands and feet behind him, and lowering a heavy rock onto his back—a contorted pose that was said to resemble the wings of the Soviet fighter planes flown by Somalia’s air corps.

Yousuf’s “crime”? He and other professionals in the northwestern city of Hargeisa had founded a volunteer group that raised money to purchase medical supplies and clean the sewage system of the city’s general hospital. Yousuf also belonged to the Isaaq clan—the dominant group in Hargeisa and one especially reviled by Siad Barre. Yousuf’s philanthropic work and clan status were more than enough for him to be convicted of treason and imprisoned in a 6-by-6-foot cell.

Yousuf was finally freed in May 1989. He fled Somalia and eventually made his way to the US, where he raised a family, began a career in IT, and settled in the Atlanta area. The man he holds responsible for his 8-year nightmare retired comfortably a few hundred miles away, in Fairfax, Virginia.

By some calculations there are as many as a half-million torture survivors living in the US. Meanwhile, the government is aware of an estimated 1,000 serious human rights violators who have also settled here, though the actual number is likely higher. At the heart of the Samantar case, says Pamela Merchant, CJA’s executive director and a former federal prosecutor, “is whether a former military officer who comes to live in the United States and seek safe haven here is above the law, or is he going to be required to live under the same laws as everybody else? The issue is whether we’re going to be a haven for human rights abusers.” If the Supreme Court upholds Samantar’s claim of immunity, it would undermine the Torture Victim Protection Act, a 1991 law championed by Sen. Arlen Specter (D-Pa.) that allows torture survivors to seek legal redress against their victimizers—and which was in part motivated by the gross human rights abuses inflicted on the people of Somalia. “Extending FSIA immunity to foreign government officials responsible for torture would effectively nullify the TVPA,” Specter and other members of Congress noted in an amicus brief they filed in the case.

For the Obama administration, the case could have significant foreign policy consequences. The administration filed its own brief in late January rejecting Samantar’s argument that he was immune from the lawsuit under the FSIA. But Obama’s solicitor general also stated clearly that current and former government officials generally have immunity for their official acts, and the authority to make such determinations resides with the executive branch. On these points, the Obama administration’s position was consistent with that of the Bush administration. But the brief also left open the possibility that the Obama White House might not assert immunity for Samantar should the Supreme Court clear the way for the case to move forward.

“They tried to walk a middle road,” says John Bellinger III, the Bush administration’s top legal adviser to the National Security Council and later the State Department. “They kind of kicked the can down the road, so that you really can’t tell what the ultimate view is going to be. They hint that they might be willing for the first time in the US or really in a major decision anywhere to suggest that former government officials don’t have immunity for certain actions.” He adds, “If I were Samantar, I’d be a little nervous.”?

The circumstances surrounding Samantar’s case are unique. After Siad Barre’s regime was overthrown, Somalia descended into chronic lawlessness and fractured into at least three separate territories, including Puntland and Somaliland (whose capital is the city of Hargeisa). When foreign policy experts talk of “failed states,” Somalia is exhibit A. The US doesn’t formally recognize any administration that speaks on Somalia’s behalf or—most importantly for Samantar—that could request immunity for his actions. “This is an individual claiming privilege on behalf of a state that no longer exists,” says Pham, who along with other experts on Somalia has filed a brief in support of the plaintiffs. Furthermore, he points out, Samantar has chosen to make his home in the US. “We’re not talking about a diplomat coming here for a negotiation and being served with something while they’re walking in the door of the West Wing of the White House.”

Still, some legal and foreign policy observers fear that any exception to the traditional principles of immunity could have far-reaching implications. A trio of Republican ex-attorneys general—Edwin Meese III, Dick Thornburgh, and William Barr—make this point in a brief they filed with the court: “The rule established in this case, we can expect, will be applied to the United States and its officials by foreign countries.” In their view, this case is as much about the immunity of US officials abroad as it is about the immunity of foreign officials here.

Bellinger, the former State Department legal advisor, raised the Obama administration’s drone strikes targeting militants overseas to illustrate the dilemma. “If the Obama administration opens this door because they want to find some way to hold Samantar accountable, they may be creating law that may be bad for the Obama administration as it is dropping ever more missiles and bombs on Al Qaeda figures in Afghanistan, Pakistan, Yemen, and Somalia…What’s to prevent some foreign court from saying, ‘Well, even though ordinarily Leon Panetta or Bob Gates or Hillary Clinton or Barack Obama himself would be immune in our courts, why, the United States Supreme Court itself has recognized that there are certain exceptions to immunity?'” He continues, “There’s a real, understandable desire and a need to hold people like Samantar accountable, but how do you do it in a way that doesn’t do violence to international law?”

But, ask human rights advocates, what about the very real violence visited on Bashe Abdi Yousuf, his co-plaintiffs, and other torture survivors? Siad Barre was never called to account for the atrocities committed in his name—as his regime crumbled around him in 1991, he “drove away in his last working tank and died an old man in his sleep,” says Pham, the Somalia expert. Pham believes allowing the dictatorship’s victims their day in court is part of the healing process for a country that has yet to recover from Siad Barre’s reign of terror—and Samantar, he says, is now the highest-ranking surviving member of that regime. “A recognition that a terrible wrong was done, near-genocidal if not genocidal violence…will go a long way for the victims, but also in setting the historical memory right for any future political settlement in Somalia,” he says. “I believe there are certain crimes that under international law there is no immunity for, one of which is war crimes. In the case of Samantar, he really should have thought about it carefully before deciding to settle in Fairfax.”