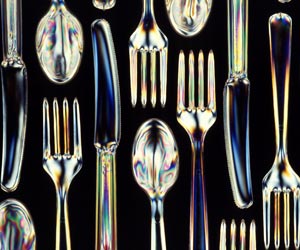 A café in my neighborhood sells salads in supposedly compostable corn-based containers. Since I live in one of only a handful cities in the US with a curbside composting program, I can just chuck my empty salad container into my curbside green bin. But I always wondered what might become of it in a backyard compost pile. Luckily, MoJo senior editor Dave Gilson answered my question last year in an article on the subject: Ramani Narayan, a Michigan State professor of chemical and biochemical engineering who helped develop biodegradable corn-based plastic, told Gilson that most plant-based plastics need to go to a commercial composting facility, not just your yard.

So if you can’t throw bioplastics onto your compost heap, can you at least recycle them? A recent UK study recommended doing so, but I’m skeptical.

Turns out industry groups have been sparring over this very issue. Bioplastics manufacturer NatureWorks LLC recently claimed that commercial recycling facilities are perfectly capable of separating out plant-based materials from conventional plastics—an essential step in part because bioplastic melts at a different temperature from most types of conventional plastic. But the National Association for PET Container Resources (NAPCOR), a trade group for manufacturers of polyethylene terephthalate (PET) plastic containers, fired back (PDF) that NatureWorks had only tested one type of sorting machine, called near infrared (NIR). “Other sorting systems were not part of the recent tests, nor were ways to address quality issues such as [bioplastics] getting stuck in the dryers during the PET reclamation process,” NAPCOR said in a press release.

The recycling gurus at Earth 911 come down on NAPCOR’s side. “Most biodegradable plastic should not go into normal recycling streams—there’s not enough research about what will happen to it,” says Earth911 spokesperson Jennifer Berry. EPA resource conservation expert Saskia Van Gendt agrees. “It’s practically impossible for sorters to differentiate the different plastics,” she says. For now the only foolproof way to recycle bioplastics is through their manufacturers. “And in order to do that, you need a large volume of containers,” says Van Gendt. “You can’t just send one container back.”

Bottom line: If you don’t have access to a commercial composting facility, your best bet is to throw bioplastics in the trash. Two notable exceptions: Coke’s new bottle, which is made from as much as 30 percent sugarcane-based plastic, has been specially designed to be recycled right alongside regular PET plastics. Then there’s Frito-Lay’s new compostable SunChips bag. Unlike the corn containers from my neighborhood café, these bags really can go into your backyard compost pile, where they will supposedly degrade in 14 weeks—no super hot commercial composting facility necessary. Cool products both, and a good sign that bioplastics might get better down the road.