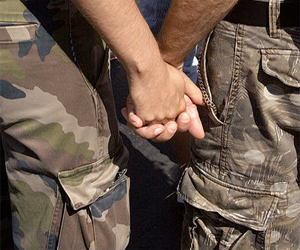 It’s been a busy week in the battle over “Don’t Ask, Don’t Tell,” including a bogus third-party outing and a stunning photo exhibit of gay service members. More on those developments in a minute, though, because first we have to deal with the big news in DADT stupidity today: The notion that gays cause war atrocities.

As a former sailor, I tend to avoid speaking ill about United States Marines, unless it’s good-natured ribbing. I respect the institution and its members, who have proven their character and professionalism time and again.

This week, news broke that Sheehan—the onetime supreme allied commander of NATO forces—told the Senate Armed Services Committee that gay troops were to blame for the massacre of civilians at Srebenica, Bosnia, in 1995—Europe’s worst war crime since World War II.

No, seriously, bear with us for this. CNN quotes Sheehan at length:

After the collapse of the Soviet Union in 1991, “nations like Belgium, Luxembourg, the Dutch, et cetera, firmly believed there was no longer a need for an active combat capability in the militaries,” John Sheehan, former supreme allied commander – Atlantic, told a Senate hearing on the don’t ask, don’t tell policy under which gays are not allowed to serve in the U.S. military openly.

“As a result, they declared a peace dividend and made a conscious effort to socialize their military,” he said. “That includes the unionization of their militaries. It includes open homosexuality demonstrated in a series of other activities, with a focus on peacekeeping operations, because they did not believe the Germans were going to attack again or the Soviets were coming back.

“That led to a force that was ill-equipped to go to war. The case in point that I’m referring to is when the Dutch were required to defend Srebrenica against the Serbs. The battalion was under-strength, poorly led, and the Serbs came into town, handcuffed the soldiers to the telephone poles, marched the Muslims off and executed them,” Sheehan said.

“That was the largest massacre in Europe since World War II.”

Besides proving himself a blithering idiot, Sheehan further dishonored himself and his Corps by apparently lying. He told the panel that a Dutch army chief named “Hankman Berman” had told him the role gays played in weakening the Netherlands’ military machine. The Dutch government promptly said it had never heard of a “Hankman Berman.”

(It’s also worth pointing out that US military intervention in the former Yugoslavia, as well as NATO and UN coordination there, was resisted and stalled by Congressional conservatives. Which means a lot of straight white Christian dudes had a hand in Srebenica. Oh, and the SERBS who did the killing? There’s them, too.)

In other dumb DADT news, a conscientious Air Force sergeant in South Dakota was booted from the service in January because local cops called her command and outed her. Apparently, Jene Newsome refused to come home from work and let police into her house while they were serving a warrant on her domestic partner. (Newsome had recently married her partner in Iowa, which recognizes gay relationships.) The police then claim that they “spotted the marriage license on the kitchen table through a window of Newsome’s home.” Unsurprisingly, Newsome and the ACLU are calling shenanigans on the Rapid City Police Department. More to follow, hopefully.

And finally, after all this ugliness, there’s something beautiful: The New York Times recently profiled photographer Jeff Sheng, a gay Harvard graduate whose latest self-published book “Don’t Ask, Don’t Tell” is a stunning collection of portraits of gay service members in uniform, their identifying characteristics obscured. It’s worth a look, and the story is definitely worth a read. Says Sheng of his project, “I merge a fight for social equality with photography, but I’m always trying to figure out how to do it intelligently.”