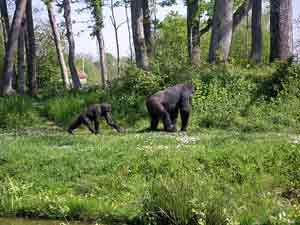 Last week, the United Nations Environmental Programme (UNEP) announced that gorillas in the Congo may be extinct by the mid-2020s, a drastic change from its 2002 projection which had 10 percent of the original range surviving in 2030. The culprits behind the demise of one of the world’s brightest primates: poaching, logging, mining, the Ebola virus, and…cell phones. Adam Hochschild’s piece in the March/April issue of Mother Jones, describes how the Congo’s vast natural resources are continuously pillaged to feed foreign interests to the detriment of locals, their environment, and now gorillas. CNN reports:

Militias have seized large chunks of gorilla land and logged and mined it. They have done so because the illegal trade in timber and in metals such as gold and coltan — used in cell phones — generates between $14 million and $50 million a year for them.

This is a tragedy for the great apes and one also for countless other species being impacted by this intensifying and all too often illegal trade. Ultimately it is also a tragedy for the people living in the communities and countries concerned. These natural assets are their assets: ones underpinning lives and livelihoods for millions of people. In short it is environmental crime and theft by the few and the powerful at the expense of the poor and the vulnerable.

Read the full report, “The Last Stand of the Gorilla – Environmental Crime and Conflict in the Congo Basin.”