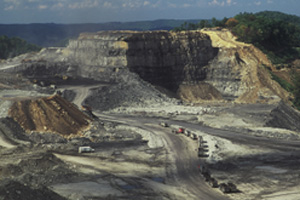 Unlike virtually all of its competitors, JPMorgan Chase steeled itself early for the collapse of the subprime market and emerged from the rubble of the global financial meltdown with both its balance sheet and reputation intact. But the storied firm stands alone among its Wall Street rivals in another area, too. JPMorgan backstops one of the most destructive mining practices in the world: mountaintop removal coal mining. And it continues to do so even as other major banks have cut ties to this practice.

“Chase is the single largest remaining player in this game,” says Scott Edwards, advocacy director for the Waterkeeper Alliance, an environmental advocacy group comprised of lawyers, scientists, and activists, among others. “They just absolutely refuse to take responsibility for their role in this absolutely devastating industry.”

Mountaintop removal (MTR) mining, focused in Appalachian states like West Virginia, Tennessee, and Kentucky, involves deforesting huge swaths of land and blasting the summits off of mountains to expose the black veins of coal underneath. The waste and rubble from the demolition is then dumped into nearby rivers and streams, burying local water sources in toxic byproducts, choking off tributaries that feed into larger rivers, and wiping out plants and wildlife, according to numerous scientific studies. Despite the mining industry’s claims, there are no successful ways to mitigate the effects of MTR, according to Margaret Palmer of the University of Maryland Center for Environmental Science. The effects on the nearby environment, she says, are long lasting and often irreversible.

The impact of MTR mining is global, too. When mining companies deforest a mountaintop before demolition, they engage in a practice that overall contributes 25 to 30 percent of greenhouse gas emissions each year. Between 1992 and 2012, MTR will have leveled 7 percent of Appalachian forests in areas studied by the Environmental Protection Agency (EPA).

Nonetheless, over the past 17 years, JPMorgan Chase has helped to underwrite nearly 20 bond or loan deals, worth a combined $8.5 trillion, for some of the biggest players in the MTR mining business, according to data from Bloomberg. Other large banks have either halted financing companies engaging in the practice outright or signaled their intent to do so. In December 2008, for instance, Bank of America publicly announced plans to “phase out financing of companies whose predominant method of extracting coal is through mountain top removal.” Wells Fargo has cut ties with coal giant Massey Energy. And a Credit Suisse official says the bank has a “global mining policy” that ensures “we explicitly do not finance the extraction of coal in a mountaintop removal setting.” But JPMorgan continues to back the practice.

By underwriting MTR, JPMorgan ties itself to some of the nation’s biggest polluters. Take Massey Energy, which leads the nation in MTR mining. In 2008, the company extracted more than 21 million tons of coal using mountaintop removal mining, according to opensourcecoal.org, an online database for coal production statistics. That same year, JPMorgan acted as lead manager on a $690 million bond offering by Massey, according to financial records.

Over the past decade, Massey has mined nearly 190 million tons of coal in Appalachia using mountaintop removal, according to opensourcecoal.org—and it has essentially disregarded the law and surrounding landscape to do so. Between 2000 and 2006, Massey violated the Clean Water Act more than 4,500 times by dumping sediment and leftover mining waste into rivers in Kentucky and West Virginia, the EPA said in 2008. (Environmental groups say the EPA’s tally is a lowball figure; they estimate that the true number of violations is more than 12,000.) As a result of these breaches of the law, the company agreed to pay the EPA a $20 million settlement.

Don Blankenship, Massey’s CEO and an avowed climate change denier, even admitted in a January debate that it’s practically impossible to engage in MTR mining without violating the Clean Water Act.

Another major client of JPMorgan’s is Arch Coal, the second-biggest American coal company and a powerful opponent of climate change regulation. In 2009 alone, Chase helped finance $600 million for the Missouri-based company, which that same year mined 4.7 million tons of coal using MTR. Arch has had its run-ins with the EPA, too: It’s currently locked in a decades-long battle with the EPA and Army Corps of Engineers, which issues MTR mining permits, over the fate of its Spruce No. 1 mine. As first envisioned back in 1998, the MTR mine would have been the largest ever, but environmental activists fought the project, and the Army scaled back the permit in 2007 so that the mine would bury eight miles of nearby streams instead of 10. (Activists are still fighting the permit, and a new court ruling is expected later this month.)

All of this begs the trillion-dollar question: Why has JPMorgan remained in the MTR business? It’s hard to know with any certainty: Like most banks, JPMorgan keeps its decision-making private. Public financial filings offer little insight, either. The bank’s environmental guru, Jim Fuschetti, a managing director who oversees its Office of Environmental Affairs, declined to be interviewed for this story. Several groups, including Rainforest Action Network and JPMorgan shareholder Boston Common Asset Management, a socially responsible investment firm, say they’ve met with the bank about its MTR financing, but members of both groups declined to discuss negotiations other than to say JPMorgan is actively examining its backing of MTR mining.

There’s no doubt growth and profit underpin much, if not all, of JPMorgan’s MTR activities. Coal is still a top energy source for the US and the developing world, and companies like Massey and Arch play a role in providing that coal for power companies here and abroad.

But even the economics of MTR are up for debate. A 2009 report by West Virginia University found that while the coal industry generates $8 billion a year for the state and other Appalachian areas in earnings and taxes, the estimated cost of excess deaths attributable to MTR mining is $42 billion a year—more than five times the economic benefit. And the authors of that report considered it a conservative estimate.

For years, environmental activists have highlighted the economic and environmental impacts of MTR in an effort to ban the practice, a goal that has the public’s backing, polls show. San Francisco-based Rainforest Action Network in particular has zeroed in on JPMorgan. The group launched a social media campaign day—using blogs, Twitter, Facebook, etc.—to protest JPMorgan, and delivered letters to branch banks calling on CEO Jamie Dimon to end the bank’s MTR support. The Sierra Club produced a video specifically singling out Dimon—a media darling and frequent visitor to the White House—for JPMorgan financing policies, contrasting Dimon’s statements about the importance of sustainability with the bank’s financing. “Tell Jamie Dimon,” the video’s narrator says, “that if he’s going to talk the talk, JPMorgan Chase needs to walk the walk.”

In mid-March, members from a progressive ministry called The Church of Life After Shopping placed mounds of allegedly toxic mud from West Virginia outside JPMorgan’s New York headquarters as well near other branch banks in New York. The Church’s Reverend Billy Talen said his group was launching an “as long as it takes” campaign to shift JPMorgan financing away from MTR mining.

Some JPMorgan shareholders have similarly protested the bank’s backing of mountain top removal mining. At least two shareholder groups have filed resolutions in 2010 highlighting JPMorgan’s support for the practice. One of them, Loyola University Chicago, called on the bank to publicly report on the impact of MTR mining by its clients, like Massey and Arch Coal, as well as the financial impact on JPMorgan if it banned MTR financing. The pushback from the university grew out of a visit to MTR sites in Appalachia by Loyola students, who were shocked at the devastation wrought on the landscape and surrounding communities, says Elaine Lehman, secretary of Loyola’s shareholder advocacy committee and a director of corporate relations at the school.

Environmental groups also point to JPMorgan’s membership in the “Equator Principles,” a voluntary set of guidelines (and predecessor to the Carbon Principles) calling for more disclosure on project financing and urging a shift toward greater investment in sustainable energy sources. If JPMorgan honored its participation in the Equator Principles, these groups say, the firm would better document its MTR financing.

Ultimately, however, environmental groups want JPMorgan to stop financing mountaintop removal mining altogether. Amanda Starbuck, who leads the Rainforest Action Network’s global finance campaign, says that if the bank is to satisfy its critics, “Nothing less than a blanket ban of mountaintop removal by Chase will suffice.”

Correction appended: A previous version of this story misstated the resolutions filed by two JPMorgan Chase shareholders. The story has been corrected to reflect the nature of each organization’s resolution.