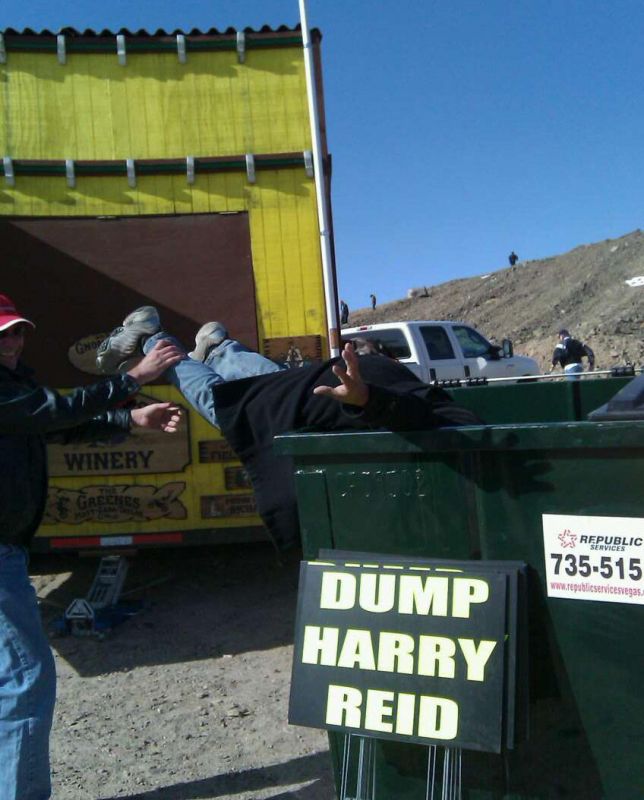 Tea Partiers from across the West have descended in their Winnebagos and pickups on tiny Searchlight, Nevada, former gold-mining capital of Clark County, and, more importantly, hometown of Senate Majority Leader Harry Reid. They’re here for the Tea Party Express’ “Showdown in Searchlight,” a conservative mega-rally (Sarah Palin is the featured speaker) in the Mojave that boosters have rebranded the “Conservative Woodstock.” Burning Man might be more like it. The timing is impeccable: One week after the biggest progressive victory in two generations, conservatives are quite literally wandering in the desert.

I realized how packed the event would get when I drove into town to the welcome of a chorus of No Vacancies (all the RV parks and motels in the area have been booked up for weeks). Luckily the owner of the property where the event is being held has opened up his land to anyone wanting to spend the night. Hundreds took him up on the offer (myself included). It wasn’t quite a field of dreams, but it’s kind of surreal to pull off a lonely highway, down an unmarked road (I missed the turnoff three times), and find an encampment of hundreds of Tea Partiers. At least a hundred RVs were there when I arrived late last night, with just as many other vehicles, and a smattering of campaign buses thrown in for good measure. For a conservative Woodstock, I can’t report much loud partying, though: “Downtown” Searchlight was largely Tea Party-free Friday night, and if there were any bonfires or karaoke contests, they were over by the time I got there. Fox News showed up at 7 this morning, just as I left for coffee.

Searchlight is about as big as it sounds; Senator Reid is 1/700th of the entire population, a fraction that dips slightly roughly once a year, when some poor soul falls through one of the hundreds of abandoned mine shafts that pock the landscape. The town does have a searchlight, which is awesome, and its main attraction, the Searchlight Nugget Casino, sells a bottomless cup of coffee for 10 cents. All of which is just a way of saying that it’s kind of bizarre to hold an angry rally in someone else’s tiny hometown—especially when it’s a hometown like Searchlight. It feels like a violation, a bit like staging a press conference in your opponent’s childhood bedroom.

So what to expect today? Palin won’t be there for too long, but the event should take up the better part of the day. I’ll be live-blogging here and on Twitter. Senator Reid, sadly, won’t be there—he has a date with Wayne LaPierre of the NRA (you can’t make this stuff up). But I’ll be talking to as many people as I can, trying to gauge the attitude of the movement one week after its biggest setback. Are they surprised the apocalypse hasn’t set in? Or do they think it already has? What gives!