And for that we’re thankful.

Last week we heard that Mother Jones is once again nominated for the ‘best of’ award for national magazines of our size (Garden & Gun, Martha Stewart Weddings: it’s on). The week before that we got two online national nominations for best blog (Kevin Drum) and best online news reporting (our intrepid reporters on the Copenhagen/climate beat). Plus we heard that our own Kate Sheppard, “the Meryl Streep of climate blogging,” is up for TreeHugger’s best Twitter Feed (follow her @kate_sheppard) and The Blue Marble is up for best green political blog (vote for them both, here). And around that same time we got word that seven illustrations from 2009 issues of MoJo are being honored by various distinguished outfits.

Now, just yesterday, we got more good news: that we’re nominated in eight categories in the best of the west awards, including, our Sept/Oct issue for best political issue of the year, reporter Anna Lenzer’s investigation into Fiji Water, staff reporter Josh Harkinson’s coverage of the US Chamber of Commerce (his latest Chamber scoop came this week), Kevin yet again, and four well-deserved nominations for the visual arts (sneak peeks after the jump).

And to ice the horn-tooting cake, our new human rights reporter Mac McClelland (author of the recently released For Us Surrender Is Out of the Question, which you can read an excerpt of here) is up for best local news voice in the “New Faces in SF Media” contest. It’s super easy to weigh in, you can just tweet your vote to #inforumsf (Twitter-phobes can use old-fashioned email).

Okay! Thanks for all your support, dear readers. Now back to our regularly scheduled (awards-worthy) programming.

Best Illustration of 2009 for Roberto Parada‘s take on “The People vs. Dick Cheney“:

Best Photo Essay for Eros Hoagland and Sarah Wilson‘s series on the Mexican drug war in “We Bring Fear“:

And Best Cover of the year, Tim O’Brien for our drug war issue, “Totally Wasted“: 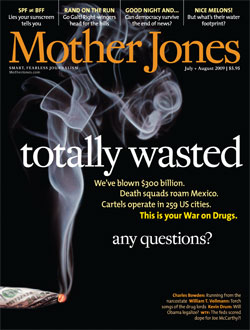 We’ll find out who the awards go to for all of the above by early May (for some much sooner). And if you’ll stand us, we’ll keep you posted.