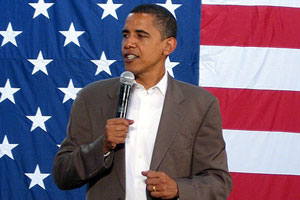 Some news outlets have described Obama’s speech at a health care rally in Pennsylvania yesterday as “angry” or “fiery.” As satisfying as it is to hear Obama say something nasty about the insurance companies, the details of his supposed “vilification” of these bloodsucking middlemen are well in line with the tepid outlines of the Democrats’ current health care reform plans. As described by the Christian Science Monitor:

President Obama charged that insurance companies have made a calculation that they can deny coverage for preexisting conditions, drop coverage when people need it most, and make big profits “as long as they can get away with it.”

It was widely known from the start of the so-called health care debate that a baseline goal would be to stop insurance companies from denying people coverage because of pre-existing conditions, or knocking people off the rolls when they got sick. (The public option, as everyone should by now have realized, was never much more than a bargaining chip.) And that’s just what’s likely to happen. The insurance companies might have to endure a few insults along the way, but in the end they will get the deal they’ve always been promised: They’ll make a few concessions in return for a boatload of new, government-mandated customers.

It was also well understood that any health care reform must genuflect before the alter of the free market. That has been a given since Reagan took office in 1981 and the conservative Heritage Foundation came up with its health care reform plan–which quite resembles the one now being promoted by Obama and many other Democrats.

The Heritage plan is based on the Federal Employee Health Benefits program (FEHB). (See Stephanie Mencimer’s earlier piece on the subject, as well as mine.) It supports a vending machine type “exchange” to sell private insurance across the country to one and all, thereby achieving a supposed twofer: affordable universal health care and preservation of the free market. The problem, of course, is that there is no free market when it comes to health insurance, and the FEHB is becoming more expensive by the day. So the exchanges will do nothing but bring mediocre and criminally overpriced insurance to a slightly larger pool of people.

And if we are to believe the latest tracking poll from the Kaiser Family Foundation, this is pretty much what Americans seem to want–a timid, lukewarm reform that addresses some of the worst abuses of the health care system without rendering any fundamental change.

Here are some details from the Kaiser poll:

The public [is] still split on health care reform legislation, with 43 percent in favor and 43 percent opposed. However, the poll also finds that majorities of Americans of all political leanings support several provisions in the health reform proposals in Congress and most attribute delays in passing the legislation to political gamesmanship rather than policy disagreements….

[The] poll finds that at least six of every ten Republicans, Democrats and independents back at least some of the key provisions in the reform bills that have passed the House and Senate. They include measures that would: reform the way health insurance works, such as preventing insurers from excluding people because of pre-existing conditions; offer tax credits to small businesses to help their workers get coverage; create a new health insurance marketplace; help close the Medicare “doughnut hole” so that seniors would no longer face a period of having to pay the full cost of their medicines; and expand high-risk insurance pools for individuals who cannot get coverage elsewhere.

It is slightly more encouraging to learn that “Providing subsidies to lower and middle income people also receives strong support from Democrats and independents and near majority support from Republicans.” The problem is that unless we take a meaningful bite out of the profits of the drug and insurance companies–which no one seems willing to do–there won’t be money left to subsidize anything other than junk insurance for those who can’t afford a decent policy.

The liberal-minded will surely object to me saying this, but I’m inclined to think the Kaiser poll is pretty accurate; because when it comes down to real social and political change, the United States is basically a conservative nation. Anything more than the most incremental change has happened only when we’ve had both a mass grassroots movement and strong political leadership–think of the Civil Rights Movement or the New Deal.

Neither one of these things has surfaced when it comes to the current health care reform. So the best we can look forward to are a few tinkerings with the existing system, which are better than nothing–but not a whole lot better.