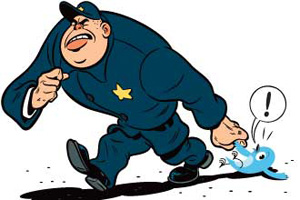 On the afternoon of September 24, 2009, Pennsylvania State Troopers, their guns drawn, broke down the door of room 238 of the CareFree Inn on the outskirts of Pittsburgh. The troopers were acting on a search warrant related to protests planned for the G20 summit—a meeting of the heads of state of the world’s major economies. Thousands of protesters had descended on the city, presenting demands ranging from curbs on carbon emissions to the outright abolition of capitalism.

Anticipating hordes of black-masked, Starbucks-smashing anarchists, the Pittsburgh police and the Secret Service coordinated nearly 4,000 law enforcement officers, outfitting them with the latest in riot-dispersal technology. Crowds marching on the summit were met with pepper spray, stun grenades, and—for the first time on US soil—acoustic cannons that blast painful sounds as far as 1,000 feet. But the protesters had their own crowd-control methods, and that’s what had brought the state troopers to the CareFree Inn.

What they found when they broke down the door were a couple of middle-aged housemates from Queens, New York. Elliott Madison sat at a desk with a laptop and a cell phone. A police scanner lay nearby. Michael Wallschlaeger was at the minifridge grabbing some hummus when the police rushed in. According to the criminal complaint filed against them, the two men had been “communicating with various protestors, and protest groups…[via] internet based communications, more commonly known as ‘Twitter’. The observed ‘Twitter’ communications were noted to be relevant to the direction of the movement of the Protestors…in order to avoid apprehension…”

Madison and Wallschlaeger were part of Tin Can Comms Collective, a “collection of communication rebels” made up of several individuals in various locations across Pittsburgh. Madison’s job was to verify information being sent in and then relay that to legal observers, street medics, and other organizers who could in turn tweet the information to the masses in the streets.

The raid occurred just as the protests were starting, but even as Madison and Wallschlaeger were arrested, the information flowed from the other tweeters without a blip. “A comms facility was raided, but we are still fully operational please continue to submit reports” stated one subsequent tweet.

The real-time updates were available to anyone who followed the feed, allowing protesters to see the theater of operations and add information to the picture. It was as if the demonstrators had gotten their own helicopter. Tin Can Comms sent out messages such as “SWAT teams rolling down 5th Ave towards Schenley” and “40 cops, w/ bus, headed towards friendship park.” The police knew they were being outflanked, but could do little against a decentralized foe: “SCANNER JUST SAID: BE ADVISED WE’RE BEING MONITORED BY ANARCHISTS THROUGH SCANNER,” noted one Tin Can tweet.

Madison and Wallschlaeger were charged with “criminal use of a communication facility,” “possessing instruments of crime,” and “hindering apprehension”—two felony counts and one misdemeanor.

With his long ponytail and goatee, Madison looks younger than his 42 years. A full-time social worker and self-proclaimed anarchist, he has long played support roles in protest movements, most often as a legal observer or a communications coordinator. He has no criminal record, but nevertheless had to post $30,000 in bail. Wallschlaeger, a 46-year-old host of a radio show called “This Week in Radical History,” had to post $5,000.

Madison calls the arrest an attempt to “stifle dissent” and says his actions were “perfectly legal.” His lawyer, Martin Stolar, calls them “absolutely protected speech.” Madison also points out the irony that last June the State Department asked Twitter to delay scheduled maintenance so as not to interrupt Iranian protesters tweeting from the barricades.

Tehran and Pittsburgh were not the first time social networking and mass texts were used to support a large-scale protest: At the 2004 Republican National Convention in New York City, thousands of protesters were organized by a mass-messaging program called TXTmob (pdf). This proved the new tools’ usefulness to both activists and police, and they adjusted their strategies accordingly. TXTmob is even credited as one of the programs that inspired Twitter’s inventors.

In Pittsburgh, the protesters’ Twitter stream continued through the end of the G20 summit, with noticeable results. By the time the tear gas cleared, only around 190 arrests had been made, far fewer than at previous protests in Seattle and New York. The media soon forgot about the story—but for the two arrestees, an ordeal that Madison describes as “Kafkaesque” was only beginning.

At around six in the morning a week after Madison and Wallschlaeger posted bail, a dozen NYPD officers and FBI agents from the Joint Terrorism Task Force (JTTF) broke down the front and back doors of Madison’s home in Queens. Guns drawn, they smashed in bedroom doors, and Madison, Wallschlaeger, their housemates, and a guest were left handcuffed on a couch. With helicopters circling overhead, agents searched the house for 16 hours. “I asked to see the search warrant,” says Madison, “and they basically said, ‘Fuck you, you’ll see it when we give it to you.'”

Court records show the FBI seized hundreds of items, including computers, hard drives, cameras, a World War I-era gas mask, “anarchy books,” even an antique needlepoint of Lenin made by Madison’s wife’s grandmother. Several issues of Steampunk Magazine, where Madison writes under the pen name Professor Calamity, were also seized, as was a guide on poisons (which he says he uses in the writing of mystery novels), a Mao Tse-tung refrigerator magnet, and several Buffy the Vampire Slayer DVDs. A poster in the living room of anarchist philosopher Mikhail Bakunin was left alone; “I guess they didn’t know who he was,” says Madison. At one point a hazmat team in full protective gear was brought in to investigate a jar of kombucha tea fermenting in the basement. Madison claims a JTTF agent shook his head and said, “You guys are just a bunch of hippies!”

The raid seemed to have an aimless quality. Madison was handed a ticket for a packet of fireworks, and an agent who put his hand into a suspected bag of marijuana discovered, painfully, that it was dried stinging nettles, used in homeopathy. “It was almost as if they thought, ‘If we take enough stuff, we’ll find something to charge them with,'” Madison says. When he was finally shown the cover sheet to the search warrant, it provided for the seizure of any items “designed or intended as a means of violating the federal rioting laws.”

The federal anti-riot statute—18 USC §2101—makes it a felony to engage in interstate travel to “organize, promote, encourage, participate in, or carry on a riot.” The statute is almost never invoked, but was used to indict the Chicago 7 for their organizing activities during the 1968 Democratic National Convention. That case was ultimately appealed and thrown out on other grounds, so the constitutionality of the anti-riot statute has never been challenged in the Supreme Court. Critics have long contended that it is vague, overbroad, and designed to suppress protest activity and free expression. Applied in the current context, “it starts to criminalize dissent, to conflate terrorism with demonstrations, and that’s a very, very dangerous notion,” says lawyer Stolar. “Essentially it’s prosecution for a thought crime.”

The fallout from the G20 protests has gotten curiouser and curiouser. In an unexpected move, the Pittsburgh charges against Madison and Wallschlaeger were summarily dismissed. A spokesman for the Allegheny County district attorney said that the defendants’ actions “may have been related to more expansive activities” and “that until further investigative activities by law enforcement agencies can be completed, it would be more prudent to have the current charges withdrawn.” Whatever the JTTF was up to, in other words, would remain secret, along with the sealed warrant that the Pennsylvania state troopers had used.

At around the same time, during an October hearing on the Queens raid, a prosecutor revealed that a federal grand jury had been convened to investigate protest activities. The affidavits containing the allegations that convinced a judge to approve the search of Madison’s house also remain sealed.

Federal and grand juries are conducted in utter secrecy and have enormous power. The old joke is that they can “indict a ham sandwich,” but if they turn up nothing, they can disappear with no public disclosure. Stolar doesn’t know of anyone who has been summoned, but given the course of events, “I would say they’re looking to go after what they consider to be hardcore demonstrators,” he says. “I have very little faith in government anyway,” says Madison, “but this is something I would have expected more under the Bush regime.” A spokesman for the US attorney for the Eastern District of New York declined to comment on the investigation.

Madison and his housemates are trying to get on with their lives, not knowing when, or if, the other shoe will drop. “Nothing could ever happen and we’ll never know why,” says Madison, sitting in the living room of his Queens home, the broken lock on the front door still unrepaired. “We’re anarchists,” he adds, “but that’s not illegal, and it’s actually a good thing. We’re not ashamed of it. Part of the thing with the government is to make you feel not only afraid but also ashamed. That’s just not going to work with me.”