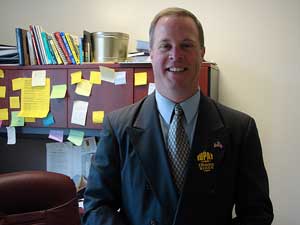 Via Politico, I see that Vice President Joe Biden is headed to Ohio to raise money for Rep. Steve Driehaus, a Democrat who opposes abortion rights. As you may recall, Driehaus was one of Rep. Bart Stupak’s (D-Mich) biggest supporters during the fight over the addition of Stupak’s anti-abortion amendment to the House health care reform bill.

Driehaus has been repeatedly mentioned as one of the so-called “Stupak 12″—a group of anti-abortion Dems who voted for the House health care reform bill in November but have reportedly vowed to vote against the final package unless their preferred anti-abortion language is included. But as I’ve repeatedly noted, the Stupak 12’s demand is impossible to meet. The abortion language can’t be changed under the majority-vote “reconciliation” process Democrats need to use to pass fixes to the health care bill through the Senate. Driehaus’s website currently displays this statement:

Last fall, I worked to pass legislation to bring needed changes to our health care system, while putting in place strict prohibitions on the use of taxpayer funding for abortion. The House will soon take up this issue again. When there is a final piece of legislation, I will take the time needed to review the bill and determine how I will vote. However, my overall position is unchanged. Health care reform is critically important for our nation, and I support efforts to enact changes to our system – if those changes are done the right way. But I’m firm in my commitment that I won’t support legislation that provides federal funding for abortion.

Never mind that the bill in question doesn’t provide federal funding for abortion. Stupak and Driehaus and their allies apparently believe it does, and they seem very willing to scuttle the health care bill because of it.

So why should the Vice President be raising money for someone who won’t vote for the administration’s signature legislative priority? The President told progressives this week that if health care reform fails, it could destroy his presidency. It might be different if Driehaus had voted against health care reform the first time around, or if he was from an incredibly Republican-leaning seat. But Driehaus’s district went for Obama over McCain by eleven points.

Even if Driehaus votes against reform this time, and the bill goes down, he’s going to get attacked for voting for the bill the first time around. Effective political parties at least try to use what leverage they do have to achieve their legislative priorities. The Democrats already showed how bad they are at politics by letting Rep. Neil Abercrombie (D-Hawaii), a sure “yes” vote, retire before the final vote. Faced with a similar situation, Republicans forced Rep. Nathan Deal (R-Ga.), a sure “no,” to stay on a bit longer. That’s how it’s done, folks. Biden shouldn’t waste his time raising money for Driehaus unless Driehaus is willing to pony up and vote for health care reform.