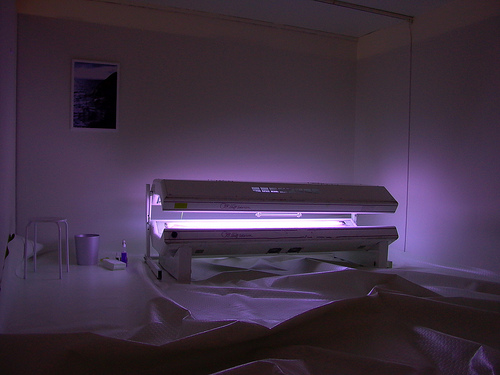 Filling in for Glenn Beck on his radio show, conservative radio host Doc Thompson recently made the stunningly outrageous claim that a tax on indoor tanning salons, as included in the health care reform bill, is racist. Such a tax, Thompson claimed, discriminates against “all light-skinned Americans” because only white-skinned Americans use tanning salons. Never mind the deadly effect tanning beds and the like have on your skin and health, nor the fact that the tax would generate $2.7 billion over ten years to help pay for health care. No, that couldn’t have anything to do with why the tax was included in the health care bill.

Here’s an excerpt of Thompson from the Beck show, via Think Progress:

Racism has been dropped at my front door and the front door of all lighter-skinned Americans. The health care bill the president just singed into law includes a 10 percent tax on all indoor tanning sessions starting July 1st, and I say, who uses tanning? Is it dark-skinned people? I don’t think so. I would guess that most tanning sessions are from light-skinned Americans. Why would the President of the United Stats of America—a man who says he understands racism, a man who has been confronted with racism—why would he sign such a racist law? Why would he agree to do that? Well now I feel the pain of racism.

Which goes to show: Give a man a mic and he’ll say pretty much anything. To be fair, it’s one thing for the tanning salon lobby to cry foul and rail against the new tax. It’s quite another to claim the tax is “racist,” adding to the plight of “light-skinned Americans” around the country. Then again, crazier ideas have seen the light of day on Glenn Beck’s radio show.