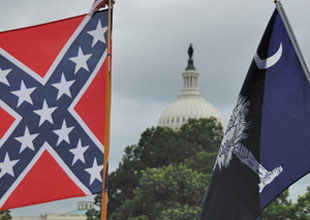 Tea Partiers protesting the health care bill in Washington hurled racist and homophobic epithets at two Democratic congressmen and spat on a black Democratic legislator prior to President Obama’s speech before House Dems on Saturday afternoon.

Rep. John Lewis was called “the N-word” when he was on the floor of the House earlier today by “a heckler from the Tea Party, a protester,” Kristie Greco, a press secretary for House Majority Whip James Clyburn, said this afternoon. Another protester spat at Rep. Emanuel Cleaver, another black Democrat, as he was walking from the Longsworth House building to attend Obama’s speech. In a separate incident, Rep. Barney Frank, who is openly gay, was called “faggot,” also as he was leaving the Longsworth building.

Clyburn, who spoke with Lewis after the incident, said that he outraged about the racist attacks on his colleagues. “I heard people saying things today I have not heard since March 15, 1960 when I was marching to try to get off the back of the bus,” he said. “This is incredible, this is shocking.” Tea Party leaders called their rally today “the last chance” to kill the health care bill, featuring speeches by Rep. Steve King, Mike Pence, and other Republican members of Congress.

Clyburn suggested, however, that he and his colleagues were not surprised that such racist sentiments were behind some of the public outrage against the Democratic health care bill.

“A lot of us have been saying for a long time that much of this is not about health care at all. And I think that a lot of people out there today demonstrated this,” Clyburn said at the Capitol Vistors Center after the speech, where protesters continued to shout “vote no” at the passing members of Congress. Rather, he explained, the protesters’ opposition was in reaction “to extend a basic fundamental right to people who are less powerful.”

When asked whether he felt apprehensive as a result of the racist attacks, Clyburn replied: “As I said to one heckler, I’m the hardest person in the world to intimidate.”

Update: Post was updated with confirmation of the spitting incident. Cleaver said that he would not press charges against the protester.