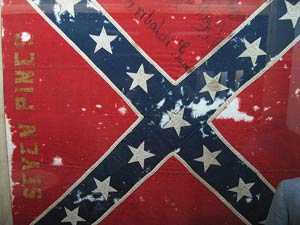 The lesson, as always: Don’t trust everything you see on TV. With the early returns in, McDonnell has turned out to be every bit the social values crusader his masters thesis suggested. First he rescinded an existing executive order protecting state employees from discrimination on the basis of sexual orientation. Then his attorney general, Ken Cuccinelli, demanded that the state university system drop its policy of not discriminating against gays. Cuccinelli, with McDonnell’s support, then led the states-rights charge against health care reform and the EPA. Now, it seems, things have reached their logical conclusion: McDonnell has put forth an executive order making April “Confederate History Month.” Party time!

Virginia’s two previous governors, both Democrats, had declined to issue such proclamations, rightly concluding that there are ways to honor the state’s heritage without offending broad swathes of the population. (Besides, there’s no absence of Confederate monuments in Virginia). McDonnell’s declaration also makes no mention of slavery, which suggests that he either knew he was crossing the line of good taste, or he simply doesn’t think slavery was all that important to the Confederacy. I’m not really sure which option speaks worse of him. And as Democratic strategist Ben Tribbett notes, this isn’t exactly an isolated incident, either.

McDonnell looks like the type of person some pundits like to call “presidential.” And because good cheekbones are apparently an important qualification for the job—here‘s David Brooks arguing that South Dakota Sen. John Thune’s exquisite facial structure would lend itself well to the Oval Office—McDonnell is a rising star in the party. If Republicans really want a gay-bashing state-rights crusader to lead them into the 21st century, they should by all means go for it. But if they do, they should be prepared to live with the consequences.

Update: McDonnell just released a statement apologizing for having omitted slavery from the pronouncement. He also added the following language:

WHEREAS, it is important for all Virginians to understand that the institution of slavery led to this war and was an evil and inhumane practice that deprived people of their God-given inalienable rights and all Virginians are thankful for its permanent eradication from our borders, and the study of this time period should reflect upon and learn from this painful part of our history…..