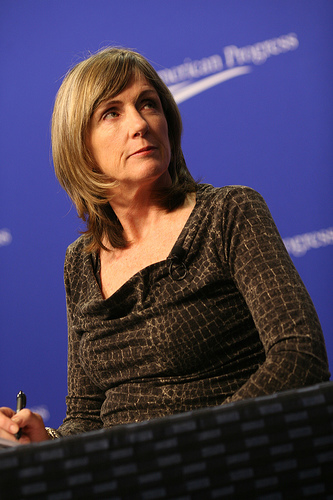 There are growing tensions in the Senate over whether Democrats should wait for a comprehensive energy and climate bill or move forward right away with a (mediocre) bill that addresses narrower energy issues. But Barack Obama’s energy and climate adviser Carol Browner affirmed on Tuesday that the administration is holding out for comprehensive legislation.

“You will hear talk about maybe an energy-only bill” Browner at an event Tuesday afternoon. “We think that would be unfortunate.”

Browner acknowledged that last week’s announcement on offshore drilling probably wasn’t very popular among environmentalists, but said it should be viewed as part of the administration’s bigger plan. The White House, she said, is engaged in talks with senators and have made their desire for a comprehensive bill “very clear.” Browner said she has been “encouraged by the work” of Sens. John Kerry (D-Mass.), Lindsey Graham (R-SC) and Joe Lieberman (I-Conn.).

Of course, there’s still no legislation from the climate troika yet. Perhaps the big question now is whether the White House will start pressuring them to pick up the pace.