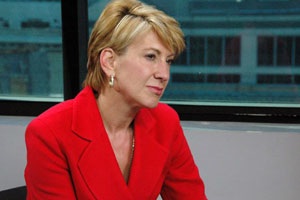 Though a national Tea Party group endorsed state Assemblyman Chuck DeVore over former Hewlett Packard CEO Carly Fiorina in the California Republican Senate primary, Fiorina isn’t holding any grudges. She’s using the Tea Party movement to raise money for her campaign. DeVore, Fiorina (of the infamous Demon Sheep ad), and former Rep. Tom Campbell are vying for the chance to face Democratic Senator Barbara Boxer this fall in an election that is shaping up to be a major battle.

On Monday night, Fiorina’s campaign sent out an fundraising email to a conservative group’s list that was timed to hit just as President Barack Obama was in Los Angeles for a Boxer fundraiser. The headline declares, “Barack Obama mocks Tea Party activists at Miami fundraiser,” and the solicitation begins:

Last Thursday, while I was at anti-Tax Day rallies in California voicing my opposition to government expansion and increased taxes, President Barack Obama was busy mocking members of the Tea Party movement.

On Tax Day, Barack Obama told a crowd of left-wing donors at a Democratic fundraising event in Miami that the Tea Party rallies across the country have “amused” him and that we should all be “thanking” him for our tax bills.

Fiorina’s letter is loaded with Tea Party rhetoric. Fiorina declares, “As a life-long fiscal conservative, I’m ready to send a message to Washington: we have had enough government expansion and taxation!” She slams Obama for mocking “us,” as if she, too, is a Tea Partier. She blasts Democrats and doesn’t once mention that she is a Republican. “We’re ready to take our government back,” she declares.

Fiorina is certainly not acknowledging that DeVore has been dubbed the Tea Party darling in the race. (DeVore was one of the few officeholders invited to speak at a Tea Party rally in Nevada in late March with Sarah Palin.) This former corporate honcho—whose stint at HP was marked by massive layoffs and controversy—wants to be seen as a Tea Partier, too.

Polls have shown Fiorina has a slight lead over Campbell (the target of her Demon Sheep attack ad), with DeVore trailing farther behind. Given that Campbell is a former US representative who had the reputation of a moderate—that is, he’s an ex-government insider who was not part of the conservative movement—Fiorina and her strategists probably figure that she has a better chance than Campbell of peeling Tea Partiers away from DeVore. On Tax Day last week, her campaign held a rally in conjunction with a Tea Party protest in San Diego and drew a crowd of a few dozen activists. Speaking at that rally, Fiorina declared, “All Americans have become members of a single party—the Had Enough Party.” That same day, she also spoke at a Tax Day demonstration in the Bay Area, where Tea Partiers, NRA activists, and Minuteman commingled. (One attendee wore a t-shirt saying, “I love my carbon footprint.”) Fiorina told the crowd that Boxer “doesn’t have a clue where jobs come from. People who create jobs and the American dream aren’t in Washington. They’re at this rally today.” (DeVore spoke at a Tax Day rally held in an Irvine, California, parking lot.)

Fiorina’s attempt at rebranding—transforming herself from controversial CEO (who was fired from her company) into a populist rebel—comes at an awkward moment. Last week, the Wall Street Journal reported that the Securities and Exchange Commission, the Justice Department, and German and Russian authorities have been investigating whether Hewlett Packard executives paid about $11 million in bribes to win a computer contract in Russia when Fiorina was heading the company. Fiorina has denied knowing anything about the bribes. But this is now a campaign issue. “When confronted with this news, Fiorina will do what she always does: deny knowledge despite having been a famously micromanaging and bottom-line-oriented CEO,” DeVore told the Los Angeles Times. “Now that she aspires to constitutional high office, she owes Californians—and herself—something more. It’s the one thing we have yet to see when she addresses her rocky and increasingly questionable corporate past: honesty.”

In her fundraising letter, Fiorina positions herself as another angry, outsider—not a onetime corporate insider. She warns that “the American Dream is in danger” due to “elitists” in charge of the government. But despite her own CEO past becoming a potential liability and Tea Party activists endorsing a rival, Fiorina has a clear political strategy: her own corporate takeover of the Tea Party.