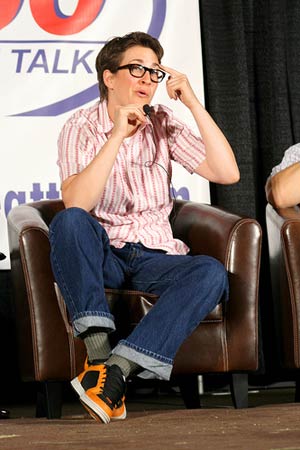 For much of the last week, revered liberal dork Rachel Maddow has been blasting Massachusetts senator Scott Brown for sending out fundraising e-mails suggesting she could run against him in 2012. Since—according to Maddow, who would presumably know—the MSNBC anchor is not going to run against Brown, this makes Brown a “liar.” To a certain extent, Maddow has a point: Brown is, of course, deliberately spreading an untruth in the hopes of boosting his fundraising totals. But the notion that a politician might sensationalize his opposition for his own gain is hardly much of a scoop, and while it reflects poorly on Brown, it doesn’t make him history’s greatest monster, either.

But there’s a bigger reason why Maddow should cool it with the criticism: she’d actually make a pretty compelling candidate. For a state that’s so heavily Democratic in its local and federal officers, Massachusetts has a remarkably thin bench of political talent. Barney Frank isn’t running. John Kerry’s already has a job. Boston Mayor Tom Menino would never run. And incumbent Gov. Deval Patrick, facing a tough re-election bid, isn’t really in a position to think two years ahead. If the 2012 Democratic primary were held today, it would likely pit Rep. Michael Capuano (whose brand of antagonistic populism is so underwhelming he once lost to Martha Coakley) against Rep. Stephen Lynch (pro-life, pro-Iraq war, and “foragainst” Health Care). Either one would probably be an improvement over Brown, but given how rarely these seats become available, it’s a bit of a wasted opportunity for progressives.

Maddow shouldn’t call Scott Brown a liar. She should take him up on the offer! She’s wonkish, affable, articulate, and, as we’ve seen, unafraid of a challenge. From a substantive standpoint, few commentators spend as much time harping on the shortcomings of Senate procedure as Maddow does (she once conducted an interview with “the Bill” from Schoolhouse Rock). Who better to come in and fix it? At the very least, she’d give complacent Bay State Dems something to be excited about. If Stuart Smalley could do it…