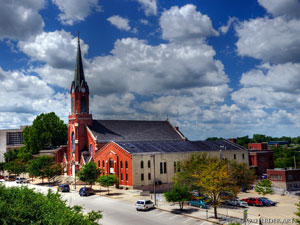 In Boulder, Colorado, a same-sex couple recently went to register their children for a new school year at the local Catholic school. Instead of being allowed to re-register, the parents were asked to decide whether the school was a “good fit” for their daughters. The message was clear: because of their parents’ relationship, the girls were no longer welcome. The matter made its way up the Church hierarchy, and Charles Chaput, the very conservative archbishop of Denver, eventually issued a statement on the controversy:

If parents don’t respect the beliefs of the Church, or live in a manner that openly rejects those beliefs, then partnering with those parents becomes very difficult, if not impossible. It also places unfair stress on the children, who find themselves caught in the middle, and on their teachers, who have an obligation to teach the authentic faith of the Church…. Persons who have an understanding of marriage and family life sharply different from Catholic belief are often people of sincerity and good will.  They have other, excellent options for education and should see in them the better course for their children.

Commonweal magazine, which my dad edits, has published a beautiful essay riffing off these events. It’s written (anonymously) by a lesbian parent who sends her kids to Catholic school. In addition to being well-written, it’s the biggest piece of Andrew Sullivan bait I have ever read in my life. Take this, for example, about coming to terms with being gay and (very) Catholic:

During my years in Boston I dated a couple of guys, one of them a former seminarian and fellow theology student. He and I attended a talk by Andrew Sullivan, then the editor of the New Republic and an out gay Catholic. I sat and listened, and knew for the first time with a semblance of peace what I had come to know in recent years in more conflicted fashion: that I was, and would always be, a gay Catholic.

Although many have tried to show me the door out of the church, I never, in my first years with my partner, pondered leaving. Like Andrew Sullivan, I think that “the issue of eros is trivial in the face of consecration, prayer, and meditation.” I thought less and less about “being gay,” per se, and continued the practice of my faith. In my work life and my home life I strove to be more loving and that itself was struggle enough. During this time the local diocese saw fit to recognize my professional work with an award at their annual prolife banquet. With some dismay, I dutifully accepted the award and shook the hand of the bishop, who is, in many respects, Archbishop Chaput’s twin, and pondered the irony of it all.

I really am eager to read what Andrew has to say about the essay, so I’m writing this to prod him to read it and respond. AND….. FAIL. Sullivan linked to it last week. But I also want to just point you in its direction. It’s a great piece of writing. Check it out.