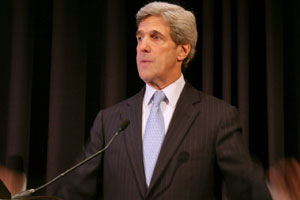 When Sens. John Kerry, Lindsey Graham and Joe Lieberman release their climate bill on Monday, they expect to have the backing of three of the five major oil companies, Mother Jones has learned. In a conference call with a coalition of progressive business leaders on Thursday evening, Kerry said he believes those companies will “actively participate in supporting this bill.” He hopes the other big oil companies will at least hold their fire on the bill, and added that he believes the American Petroleum Institute (API), the oil industry’s major trade group, will call off its ad campaign attacking the legislation.

Kerry also said that the Edison Electric Institute—the main trade group representing utilities—will support their measure. “We are bringing to the table a significant group of players who were never there for the Waxman-Markey bill,” Kerry said. (While Edison supported Waxman-Markey, it was opposed by several big oil companies and API).

In the teleconference, organized by the We Can Lead coalition, Kerry outlined specific details from the bill that have not previously been publicly available. Here’s a rundown:

Some elements of the legislation remain in flux, Kerry said. The senators still haven’t figured out how to deal with the contentious question of offshore drilling. He added that they are still trying to secure the support of the Chamber of Commerce, another prime foe of the House measure, but remain hopeful that the powerful business lobby might endorse the bill.

UPDATE: Post Carbon reports that the three oil companies expected to endorse the bill are Shell, BP and ConocoPhillips.