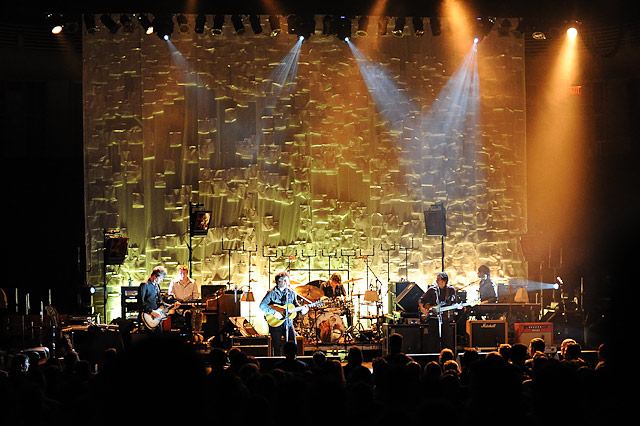 Wilco‘s Jeff Tweedy promised fans he would “feed them with tunes” during last weekend’s show at New Jersey’s Wellmont Theater, and feed them he did, serving the hungry crowd with three hours of music spanning the credible indie band’s seven albums. They even dipped into side-projects and performed an exquisite cover of Big Star‘s “Thank You Friends” in memory of Alex Chilton, who died last month of a heart attack. Concert-goers who paid $45 a ticket essentially paid $1.20 a song for their evening with Wilco. Not too shabby, eh?

On a stage primarily lit with fancy candelabras and a light-soaked back-drop, Wilco played a three-dozen song menu that included everything from art rock and folk rock to country rock and near hard-rock. Having released their last album more than a year ago, Wilco’s current cross-country tour is not an advertisement of their current work, but rather a showcase of the veterans’ two-decades of experience. Tweedy’s vocals were subdued, yet powerful in the stunning “Poor Places,” while the percussion in “Via Chicago” was thunderous. The show also featured the band—additional drum set, keyboards, and all—parked at the edge of the stage for an acoustic set lit only by floor lamps featuring rare gems like “Someday, Some Morning, Sometime” and “Laminated Cat.” Kudos to the stage crew for executing such a complicated shift mid-show.

The final set featured a number of high-energy fan favorites, like “A Shot in the Arm,” “Heavy Metal Drummer,” and “I’m the Man Who Loves You”—each of which left the crowd wondering, “Oh no! Is this the last song?” But each time, Wilco kept going, albeit with a few interludes of Tweedy asking if the audience had had enough. No! (Duh.) For me, the icing on the cake of this hearty show was Nels Cline strapping on a double-neck guitar, an instrument I’d never seen in action live. Next up, Wilco embarks on the international segment of their tour, heading to Japan, New Zealand, and Australia, and then on to numerous dates in Europe.