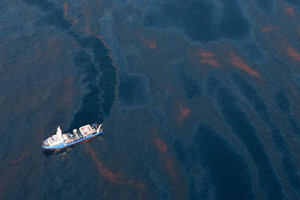 The giant patch of oil seeping onto Louisiana coast today is sure to have dire environmental consequences. But the explosion and subsequent spill are also spurring political pushback against the Obama administration’s plans to vastly expand drilling off the shores of the United States, a scheme unveiled just one month ago.

The White House called together a press conference yesterday afternoon, lining up heads of the Coast Guard, the Department of Homeland Security, the Interior, and the Environmental Protection Agency to discuss the state of the spill. The administration pledged an “all hands on deck” approach to the spill, but maintained its support of offshore expansion. “We need the increased production,” said White House press secretary Robert Gibbs. “The president still continues to believe the great majority of that can be done safely, securely, and without any harm to the environment.”

But by Friday morning, the White House had shifted its stance a bit, with adviser David Axelrod announcing plans to pause drilling expansion in an appearance on Good Morning America. But Axelrod was clear that this isn’t a permanent move. “All he has said is that he is not going to continue the moratorium on drilling but … no additional drilling has been authorized and none will until we find out what happened here and whether there was something unique and preventable here.”

Obama tried to strike a balance in a statement Friday between condemning the incident and holding the line on expansion. “I continue to believe that domestic oil production is an important part of our overall strategy for energy security, but I’ve always said it must be done responsibly, for the safety of our workers and our environment,” said Obama.

But the White House is under increasing pressure to permanently forestall its offshore plans. What was extended as an olive branch to moderate Democrats and Republicans in hopes of getting a comprehensive energy plan in place has quite literally blown up in Obama’s face. Obama had opposed offshore drilling in the early days of his candidacy, before switching to support it amid the “drill, baby, drill” calls of the summer of 2008. It was at that time Congress also allowed the long-standing moratorium on drilling in the outer continental shelf to expire, paving the way for the administration’s announcement of plans to open new areas to drilling last month.

Obama has been getting plenty of heat for the concession from coastal state Democrats. New Jersey Democratic Sen. Frank Lautenburg condemned Obama’s expansion plan as “Kill, baby, kill,” before the rig explosion claimed 11 human lives and imperiled sensitive Gulf Coast ecosystems. Yesterday, Florida Democrat Bill Nelson fired off a missive to Obama, calling for an “immediate halt” to new drilling and warning that he would introduce legislation that would prohibit the Interior Department from enacting its new lease plans. A group of New Jersey Democrats, led by Sen. Robert Menendez, also called on the White House to stand down on offshore drilling Friday, asking the administration to “suspend all action on expanding such exploration on the Outer Continental Shelf immediately and reverse any plans to drill off the Atlantic coast.”

House Speaker Nancy Pelosi (D-Calif.) pledged to “review the plan that the president put forth,” taking the spill into consideration, and both the House Energy and Commerce and Select Committee on Energy Independence and Global Warming committees have announced investigations into the Deepwater incident.

The spill is also changing the political calculus on climate policy in the Senate. Draft legislation from Sens. John Kerry (D-Mass.), Lindsey Graham (R-SC) and Joe Lieberman (I-Conn.) was supposed to be unveiled this week and was expected to create additional incentives for states to open their coastal waters to drilling. Kerry last week touted their bill’s support from oil companies as a landmark achievement. But that rollout was indefinitely postponed this week as Graham and Majority Leader Harry Reid wrangled over the legislative calendar. Meanwhile, the disaster has fueled new debate over what exactly that bill might say on offshore drilling, when and if it is actually introduced.

Even before the Deepwater disaster, ten coastal-state Democrats had fired off warnings, threatening to vote against comprehensive policy that included an expansion of drilling. “The administration is well aware of my position—this is fundamentally wrong as an energy policy at a time when we have an opportunity to drive toward clean energy sources,” said Menendez in a statement to Mother Jones. “They are in danger of losing the vote of someone who is a champion of clean energy and healthier communities.”

At the same time, many moderate Democrats and Republicans—folks like Graham, Louisiana Democrat Mary Landrieu, and Alaska Republican Lisa Murkowski—have insisted that more drilling in a bill will be essential to securing their vote. But in just a week, the mood has changed significantly on both this bill and the role of the oil industry in policy debates.

On Friday, environmental groups, many of which had indicated a willingness to accept some offshore drilling in a climate and energy bill in exchange for components like a price on carbon pollution and a renewable energy standard, were rallying in opposition to Obama’s plan. “We were willing to accept some new drilling, but this changes everything,” said Athan Manuel, director of the lands protection program at Sierra Club. “I can’t imagine there’s going to be any offshore dilling in this bill … If they drop a climate bill with offshore drilling in it, those are the three most tone deaf Americans in the country.”

Sierra Club, MoveOn, and other groups have sent action alerts to members urging them to contact senators and the White House to restore offshore protections. But at the same time, many groups have remain reluctant to weigh in on the Senate calculus. This is in part because nobody has actually seen the bill, and also because it already faces a perilous path forward. “Our position has been we don’t want to see expanded offshore drilling,” said Sara Chieffo, deputy legislative director at the League of Conservation Voters. But, she added, on the politics in the Senate, “It’s too soon to predict how the chips will fall on this, given the unfolding challenges in the Gulf.”

As the tragedy continues to unfold in the Gulf, the politics on the issue get no less complicated for Obama or the Senate.

“Until the hows and whys are answered it’s going to be really tough for policy makers to know exactly what the next steps are,” said Josh Freed, director of the Clean Energy Initiative at Third Way, a think tank that works with moderate Democrats on policy initiatives. “Opponents of offshore drilling are going to have a powerful narrative to block any action.”

UPDATE: Looks like another rig overturned in Louisiana today, this one a “mobile inland drilling unit.”