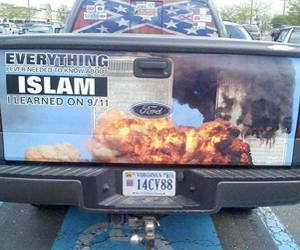 [UPDATED] Last week, Mother Jones gave you the rundown on a Virginia motorist who considered the back of his Ford pickup the best forum to display his anger over Islam, the end of the Confederacy, and all things not Aryan and Hitler-related. Yesterday, that driver, Doug Story, sought out reporters at Washington’s paper of record to argue he’s not a racist—just a NASCAR fan. The Washington Post dutifully played along, printing Story’s explanation with few caveats. But if Story thought he could control his public image, perhaps he should have updated his Facebook profile first to conceal his apparent affinity for organized neo-Nazi groups and white-power theories.

Doug Story, a dump-truck driver for the Virginia Department of Transportation and a resident of the Fairfax area in Northern Virginia, told the Washington Post this is all a big misunderstanding. He said the numbers 14 and 88 on his vanity plate—which line up with well-worn neo-Nazi and white supremacist codes—simply refer to the numbers of his favorite NASCAR drivers, Tony Stewart and Dale Earnhardt Jr. (Which sounds slightly fishy, since fans of one don’t generally have much love for the other.)

“There is absolutely no way I’d have anything to do with Hitler or Nazis,” Story said Wednesday. He contacted The Washington Post after an article about his plate appeared last week; the state, citing privacy rules, had declined to release the identity of the plate’s owner. “My sister-in-law and my niece are Jewish. I went to my niece’s bat mitzvah when she turned 13 three years ago. Does that sound like something an anti-Semite would do?”

That’s all well and good. However, Story’s Facebook profile—which confirms his employment with the state—tells a different story. [UPDATE: The original profile has since been taken offline, but a screenshot is available here.] His bio reads:

Most concerning of all, though, is the link he includes as his personal website: He is known as “Confederado” on the site newsaxon.org, which bills itself as “An online community for whites by whites.” It also includes banner ads for the National Socialist Movement—that is to say, the Nazis—whose website, nsm88.com, apparently includes a shout-out to Dale Jr. Or, Hitler!

Generally speaking, it’s not a standard journalistic practice, for a lot of reasons, to make hay about an individual private citizen and his political activities. But in seeking out a public news forum—and working for the state of Virginia—Story submitted himself to public scrutiny, all the more so because his personal beliefs appear not to square with the persona he sought to project in the Post. And the contents of those beliefs are in the public interest—wishing physical ill on the president, who happens to be multiracial, which happens to offend the sensibilities of David Duke and neo-Nazis, who happen to figure prominently in Story’s apparent worldview, which is a worldview widely seen as invalid and threatening to American social and political life.

Story’s entitled to any belief; he’s also entitled to freedom from harassment. (So please don’t go after him.) But in what’s been a banner year for nativism, racism, and uncivility in American political life, Story also should be willing to account for those beliefs, and all the baggage that they carry.