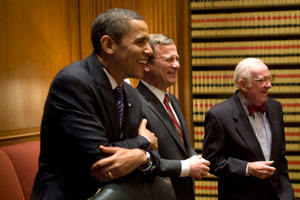 Two prominent Americans announced their retirements on Friday. Marc Ambinder reported early this morning that Rep. Bart Stupak (D-Mich.), who led a group of pro-life Democrats during the health care debate, won’t run for reelection. That decision will probably hand Stupak’s GOP-leaning seat in northern Michigan to the Republicans. But Stupak’s announcement has been overshadowed by an even more noteworthy (although widely anticipated) retirement: that of Supreme Court justice John Paul Stevens, the Gerald Ford appointee who became the leader of the liberal wing of the Court. The Associated Press reports that Stevens will step down when the Court finishes its term in June or early July.

Now President Barack Obama has to find someone to replace Stevens on the Court. Obama, by all accounts, is not looking for a fight. But this summer, with the midterm elections looming, he could easily get one. The three people who are widely acknowleged as the top candidates to replace Stevens are Elena Kagan, the solicitor general (basically the government’s top lawyer); Diane Wood, an appellate court judge; and Merrick Garland, another appellate judge. Kagan is 49; the other two candidates are in their late 50s. It goes almost without saying that if Obama really wants to reshape the court, he’d want to appoint the youngest, most liberal person who can win confirmation. George W. Bush understood that dynamic: Samuel Alito was 55 when he was nominated; Chief Justice John Roberts was just 50.

The New Yorker‘s Jeffrey Toobin recently wrote an excellent profile of Stevens and what the court might look like without him. You should read the whole thing, but this bit, from the end, seems especially relevant today:

In 2005, a year before his death, Ford wrote, in a tribute to Stevens, “For I am prepared to allow history’s judgment of my term in office to rest (if necessary, exclusively) on my nomination thirty years ago of John Paul Stevens to the U.S. Supreme Court.”

As for Obama, Stevens said, “I have a great admiration for him, and certainly think he’s capable of picking successfully, you know, doing a good job of filling vacancies.” He added, “You can say I will retire within the next three years. I’m sure of that.”

He will not be seen again, under any circumstances, at a State of the Union address. “I went to a few of them when I was first on the Court, but I stopped,” Stevens told me. “First, they are political occasions, where I don’t think our attendance is required. But also it comes when I am on a break in Florida. To be honest with you, I’d rather be in Florida than in Washington.”

Let’s hope that one day Obama feels as comfortable with his choice to replace Stevens as Ford did with his nomination of the genuine article.