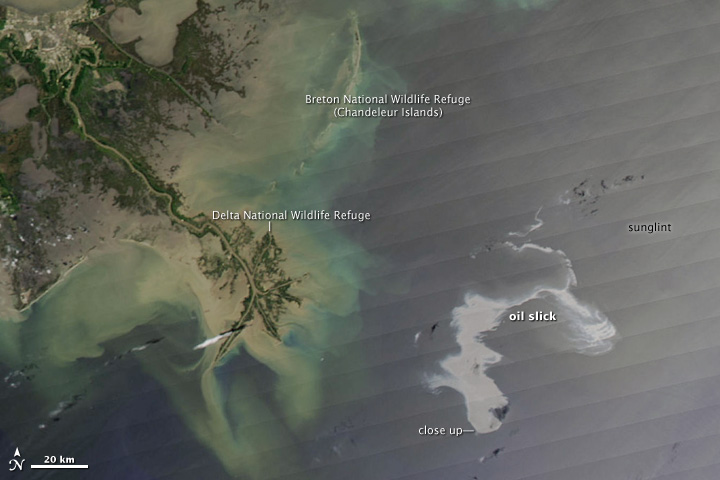 Last week’s explosion of the Deepwater Horizon oil rig likely claimed the lives of 11 workers, and what’s left of the rig is currently hemorrhaging oil into the Gulf of Mexico at a rate of 42,000 gallons per day—two painful reminders that our fossil fuel reliance is neither safe nor clean.

The massive spill, just 50 miles off the coast of Louisiana, already covers more than 1,800 square miles. It is expected to hit land by Saturday. The leak from a pipe about 5,000 feet underwater may take up to two weeks to fix. Meanwhile, clean-up crews are dropping chemical dispersants into the water to try to prevent the spill from reaching land, where it would wreak environmental havoc on coastal ecosystsems (both the Delta National Wildlife Refuge and Breton National Wildlife Refuge are not far from the spill site). But as the New York Times reports, those dispersants can also be toxic to sea life; the United States Fish and Wildlife Service reported sighting three sperm whales near of the spill, so crews were instructed to “steer clear” when dropping the chemicals.

This marks the worst oil rig disaster in decades, and it comes just weeks after the Obama administration announced plans to expand offshore drilling. Despite the fact that the oil industry and its government supporters claim that new technologies have made the sector “environmentally responsible”, the blast makes it clear that oil extraction still has potentially catastrophic effects. And as Marcus Baram reports today, the oil industry, including including Deepwater Horizon rig owner Transocean Ltd. and operator BP, has fought against new safety rules that might have prevented this disaster.

The episode has prompted new concerns in Congress about the prospects for expanded drilling. Three Senate opponents of offshore drilling, Democrats Bill Nelson of Florida and Frank Lautenberg and Robert Menendez of New Jersey, on Monday called for a congressional investigation into the blast, calling it “a sobering reminder of the real risk from oil drilling.” The explosion and subsequent leak, the senators wrote in a letter to relevant committee chairs, raise “serious concerns about the industry’s claims that their operations and technology are safe enough to put rigs in areas that are environmentally sensitive or are critical to tourism or fishing industries.” All three have vowed to vote against climate and energy legislation if it includes an expansion of oil drilling.

“If this doesn’t give somebody pause, there’s something wrong,” Crist said. “This is, as I understand it, a pretty new rig with modern technology. As I’ve always said it would need to be far enough, clean enough and safe enough. I’m not sure this was far enough. I’m pretty sure it was not clean enough. And it doesn’t sound like it was safe enough. It’s not a great situation.”

Obama’s announcement of his offshore expansion plan last month called for drilling “in ways that protect communities and protect coastlines.” This recent spill makes it clear that may be an empty pledge.