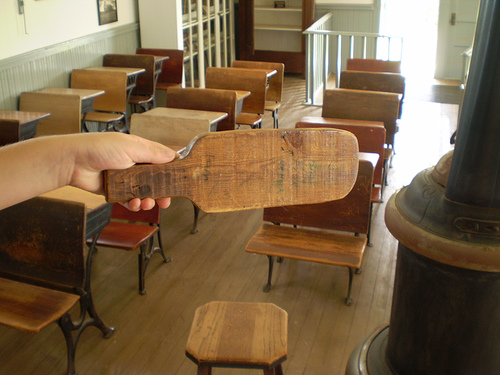 Corporal punishment is unlawful in federal prisons, but it’s still allowed at schools in some 20 states, including Texas where one town has brought back the paddle, the Washington Post reports. A blue-collar community of 60,000 people, Temple, Texas, banned paddling six years ago only to revive its use in the town’s 14 schools last May after a unanimous board vote. Parents supported the measure, and in fact encouraged the school board to reconsider the paddling policy because many Temple parents who paddle their children at home wanted consistent discipline in the classroom.

“We’re rural central Texas,” Temple’s assistant superintendent of administration for schools, John Hancock, told the Post‘s Michael Birnbaum. “We’re very well educated, but still there are those core values. Churches are full on Sundays… this is a tool we’d like in the toolbox for responding to discipline issues.” Temple school board president Steve Wright claims that behavior at the town’s lone high school has improved dramatically since paddling made its return. Fear of the paddle is as much a disciplinary deterrent as the controlled beating itself, some Temple residents argue.

At least one congresswoman from New York disagrees. Rep. Carolyn McCarthy recently led a Congressional hearing on paddling in schools, and plans to introduce federal legislation inside a month that will ban the practice nationally. McCarthy’s leadership on this issue could not come sooner. A joint ACLU and Human Rights Watch report from last year found that students with disabilities receive the brunt of the corporal punishment doled out in schools and are sometimes beaten or restrained to control behavioral problems stemming directly from their disabilities.

In spite of what Temple believes, nonviolent forms of behavior control do exist. Many educators and psychologists say positive reinforcement, like praising students for good behavior, and withholding praise for bad, are the most effective methods for curbing misbehaviors. Positive reinforcements “encourage [students] to behave well in the future,” ACLU/HRW study author Alice Farmer told the Post. Paddling “makes students lose respect for their teachers.”