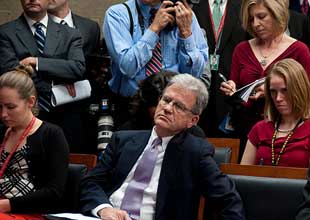 The congressional resolution seemed about as innocuous as they come. It commemorated the 40th anniversary of Earth Day and honored its late founder, Sen. Gaylord Nelson (D-Wisc.). But in this highly politically charged Congress, even a minor measure can touch off a legislative scuffle. Such was the case last week, when one of the Senate’s most notorious bill-blockers, Oklahoma Republican Tom Coburn, almost derailed the Earth Day resolution.

Coburn is among the Senate’s most prolific users of the hold, an informal procedure that effectively allows a single lawmaker to hold legislation hostage by preventing it from reaching a full vote. In the past, he’s employed this tactic to stall a range of bills, including measures to provide back pay to furloughed federal workers, to aid peace efforts in Northern Uganda, and to create a State Department office to coordinate reconstruction efforts in conflict zones. When Coburn blocks a bill, his reasons are typically fiscal. “Dr. Coburn routinely puts holds on bills, even bills he supports, if they support new money and are not offset,” his spokesman, John Hart, told Mother Jones earlier this year.

But the Earth Day resolution entailed no federal outlays. It was merely a formal recognition of the achievements of Nelson, an environmental crusader who sponsored the first bill to ban the use of the pesticide DDT. During his nearly two-decade Senate career, Nelson, a Presidential Medal of Freedom recipient, was also known as a champion of consumer causes and an anti-poverty advocate.

Nevertheless, Coburn threatened to withhold his support for the resolution, which was initially drafted by Rep. David Obey (D-Wisc.), until particular language was removed from the Senate version. His objections centered on two lines:

Whereas Gaylord Nelson sponsored legislation to ban phosphates in household detergents and to ban the use of Dichlorodiphenyltrichloroethane (DDT), and he worked tirelessly to ensure clean water and clean air for all Americans;

Whereas in addition to his environmental leadership, Gaylord Nelson fought for civil rights, enlisted for the War on Poverty, challenged drug companies and tire manufacturers to protect consumers, and stood up to Senator Joe McCarthy and the House Un-American Activities Committee to defend and protect civil liberties;

In the version of the bill that ultimately passed, clauses Coburn found objectionable relating to Nelson’s work to ban DDT, as well as his anti-poverty, consumer protection, and civil liberties advocacy were edited out. It now reads:

Whereas Gaylord Nelson sponsored legislation to ban phosphates in household detergents and he worked tirelessly to ensure clean water and clean air for all Americans;

Whereas in addition to his environmental leadership, Gaylord Nelson fought for civil rights;

“The House passed the resolution earlier this week, and we were only able to pass it (on Earth Day!) after making changes that were demanded by Senator Coburn,” a Democratic Senate staffer wrote in an internal email that was circulated on Friday and obtained by Mother Jones.

“You read that right! Tom Coburn: Against the War on Poverty, and For Joe McCarthy,” the staffer fumed.

Coburn’s spokesman, John Hart, acknowledges that his boss requested changes to the resolution, which, he quipped, “read like a blog post for the Daily Kos more than a congressional resolution.” He explained that Coburn’s primary objection to the bill had to do with the section on DDT. “Dr. Coburn’s primary concern is that the DDT ban was based on science that has been widely discredited,” Hart said. “The DDT ban went too far and contributed to thousands of unnecessary malaria deaths in the developing world.” He continued, “Dr. Coburn did not object to the references to McCarthy and civil rights. Unfortunately, Rep. Obey placed those references in the context of various liberal bromides that were not appropriate in context.”

This isn’t Coburn’s first time trying to halt a resolution celebrating an environmental legend due to his pro-DDT position. A few years ago, Coburn placed a hold on a measure celebrating Rachel Carson, the author of the 1962 book Silent Spring, which exposed the environmental hazards of the pesticide.

The resolution was intended to honor the work of Senator Nelson, the founder of Earth Day. It was not an expression of agreement or disagreement with Senator Nelson’s views. It’s simply a description of the actions he took that built his reputation and determined his place in history.

If Mr. Coburn was unhappy because of Senator Nelson’s position on DDT and McCarthy, then he had every right to vote against the resolution. But to put a hold on the resolution, blocking the entire institution from voting to honor the late Senator, goes too far and illustrates what’s wrong with the Senate.