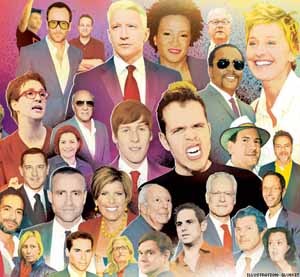 OUT magazine recently released its 4th Annual Power 50 list of the most influential gays in the U.S.. This is the same magazine that honored Katy Perry with a “People of the Year” award for her song “I Kissed a Girl,” whose contribution to gay rights was reassuring girls that it’s okay to fool around with another girl as long as you’re drunk and have a boyfriend. If you can look past that, however, then read on.

OUT determines its rankings by examining political clout, wealth, cultural significance, and a person’s media profile. Bumping last year’s top slot getter Barney Frank is Ellen DeGeneres, whose current stint on American Idol and 29-time Emmy-winning talk show have catapulted her into super stardom. An avid supporter of gay marriage, repealing Don’t Ask, Don’t Tell, and animal rights, Ellen recently gave scholarship money to Constance McMillen, the Mississippi teen whose school cancelled prom when she had the audacity to try to take her girlfriend and wear a tuxedo.

Other highlights of the overwhelmingly white and male list are:

Anderson Cooper, CNN’s silver fox, who has never publicly come out of the closet, but never mind that.

Andrew Sullivan from The Atlantic Monthly, a pundit who has ruffled his share of political feathers. For instance, he was taken to task for spreading Sarah Palin pregnancy rumors and was arrested for marijuana possession, though the case was later dismissed. Today he ruffled MoJo’s own Kevin Drum.

Perez Hilton, whose most publicized moment of the year was the “ongoing battle with Miss California, Carrie Prejean, over gay marriage, which found Hilton using his powers for good (surprisingly) and transforming him into one of our most visible activists.” Thus, OUT redefines activism as “calling someone a b*tch repeatedly.”

Rachel Maddow, who, when asked by the Washington Post whether she was biased on gay issues, said “I can’t do the show as a non-gay person. I don’t have that option.”

Anthony Romero, head of the ACLU, who in addition to taking on Constance McMillen’s case (and winning!), was called “The Champion of Civil Rights” by TIME magazine.

Tammy Baldwin, the first out lesbian elected to the House of Representatives and whose successes include the passage of the Matthew Shepard Hate Crimes Prevention Act and the credit card accountability act. Baldwin is also cosponsoring ENDA (the Employment Non-Discrimination Act) with #2 power lister Barney Frank, which is currently stalled in Congress.

Wanda Sykes, comedian extraordinaire and the first African-American woman and first openly LGBT person to host the annual White House Correspondents Dinner. Her second greatest accomplishment, according to me, is performing the American Idol parody song, “Boobs Out Yo Blouse.”

And American Idol runner-up Adam Lambert nabbed a surprisingly high spot on the list (#5), which just goes to show you that it’s only a matter of time before American Idol, along with Google, will rule our fair land.

Any surprises on this list? Who do you think was left out?