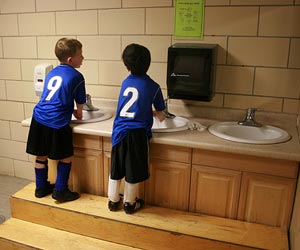 If you’ve ever used antibacterial soap, chances are you’ve rubbed the chemical triclosan on your hands. In fact, says the Washington Post, triclosan is so common that it’s been found in the urine of 75 percent of the population. Mother Jones reported that it’s also been detected in breast milk and 58 percent of US waterways. The problem: Experts strongly suspect that the chemical disrupts the endocrine system and also could contribute to antibiotic resistance.

Good news, then, that the FDA has finally decided to investigate the health effects of triclosan. An FDA spokesperson told the Post:

“For triclosan, the science is changing,” Throckmorton said. “Based on what we know, we don’t have evidence to suggest this chemical is a threat to human health. However, we have to understand better the health effects and we have to work with other agencies to collect that information and then decide whether or not we need to change how it’s regulated.”

But the soap industry trade group has already fought back. Says Brian Sansoni of the Soap and Detergent Association:

“These products and ingredients have been reviewed, regulated and researched for decades,” he said. “We believe the science strongly supports the safety and efficacy of these products. It’s more important than ever that consumers continue to have access to these products. It’s a time of increased threats from disease and germs.”