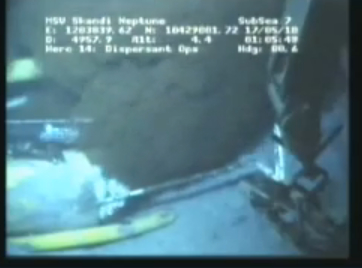 Photo of oil well, via <a href="vhttp://www.youtube.com/watch?v=_ybE8jZAxdc&feature=channel">Sen. Bill Nelson's YouTube</a>.

After weeks of misleading the public about how much oil is leaking into the Gulf of Mexico, BP is now walking back from the 5,000-barrel-per-day figure, calling it their “best estimate” but downplaying its significance.

“That was within a wide range,” BP chief operating officer Doug Suttles told reporters Friday afternoon. “We’ve said this since the beginning, there’s a huge amount of uncertainty around that number.”

Outside experts have put the spill rate as high as 95,000 barrels per day, or nearly 4 million gallons. The numbers BP offered this week about how much they are currently siphoning from the site also seem to indicate that the total is much higher than 5,000.

The difference in a single day is significant, but it’s a radical difference when considering how much oil has spewed into the Gulf in total so far. If you believe BP’s estimates, 6.9 million gallons of oil have already hemorrhaged into the Gulf; if you believe the most dramatic outside estimates, the figure is likely closer to 131.6 million gallons.

BP has made every effort to downplay the size of the spill so far, with CEO Tony Hayward last week assuring folks that the spill was “relatively tiny” compared to a “very big ocean.”

Meanwhile, BP’s reps have been fighting off media coverage on the scene. A boat chased a CBS news crew off a Louisiana beach last week. Our own Mac McClelland was barred from an oil-slicked beach by a local sheriff today and referred to a BP “liaison.”

As many have pointed out, the company has can a very good reason to shield the public from the reality of the spill, as it could save the company millions in court.

The federal government, after weeks of repeating the 5,000-barrel figure, yesterday announced it is forming a Flow Rate Technical Team comprised of experts from the Coast Guard, government agencies, and universities to assess the real rate of flow from the hole.

National Oceanic and Atmospheric Administration head Jane Lubchenco defended the administration’s use of the 5,000-barrel figure on Thursday: “That number was useful and the best estimate at the time.” She said the administration’s primary focus had been on the efforts to cap the well, rather than on measuring the flow. Even with this new flow team in place, we might not have an answer from them for a while. U.S. Coast Guard Rear Adm. Mary Landry told reporters Friday that they plan to take time in assessing the figure, and have it peer-reviewed. “This team is not going to be rushed to come up with a figure too quickly,” said Landry.