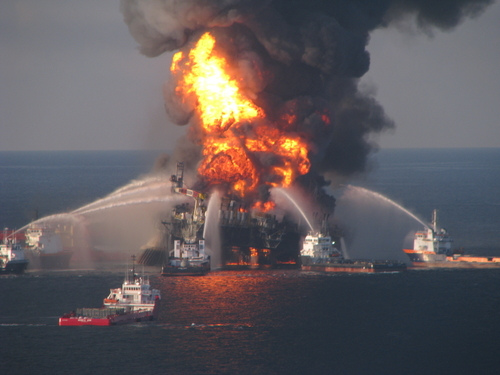 There were a number of warning signs in the 24 hours before the blast that destroyed the Deepwater Horizon on April 20. Failed tests, concerns with equipment, and building pressure in the well indicated problems with the operation, according to a report released by a congressional committee investigating the disaster.

“[K]ey questions exist about whether proper procedures were followed for critical activities throughout the day” of the blast, the report concludes. While of their memo reaffirms information that has come out in hearings, it also raises new questions about some of the warning signs before the blast.

The report was compiled by the House Energy and Commerce Committee from internal documents from BP (the rig’s operator), Transocean (the rig’s owner), and Halliburton (the company that poured the cement for the well). It notes that there were signs that too much gas was entering the well and that the cement job on the well might have been faulty. But it appears that those problems may have been ignored and proper procedures were not followed.

From the committee’s summary:

The report isn’t conclusive; the information is drawn from company documents, and so far each company involved has pointed the finger at the others for failures on the rig that might have lead to the blast. Hearings on the explosion and spill continue today in Louisiana focusing on what happened on the rig that day. In Washington, the House Natural Resources Committee will hold hearings Wednesday with government regulators overseeing drilling, and on Thursday with the CEOs of companies involved in the accident.