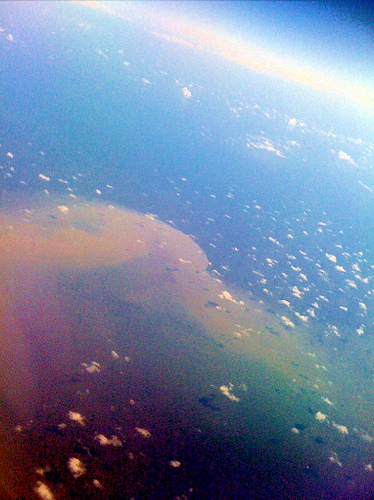 The amount of oil that has been leaking into the Gulf for the past 37 days might be as high as 25,000 barrels per day, according to preliminary results from the government team assembled to evaluate the flow. Based on a variety of estimates from team, the spill is most likely between 12,000 and 19,000 barrels per day, the head of the team said Thursday.

There were several teams evaluating satellite images of the surface of the Gulf and video from the spill site. Even the lowest estimate from one team, 11,000 barrels per day, is twice the amount that National Oceanic and Atmospheric Administration (NOAA) estimated on April 29. The highest estimate was 25,000 barrels, which would be five times the previous estimate.

U.S. Geological Survey Director Dr. Marcia McNutt, who is heading the spill rate team, emphasized in a call with reporters that these are preliminary figures and teams continue to evaluate the flow. McNutt also said that the initial low figures didn’t influence response efforts, which have “been based on a worst-case, catastrophic scenario.” “The scale of response would have been the same at 1,000 barrels a day or 100 times that,” McNutt said.

NOAA head Jane Lubchenco has said that the 5,000 figure “was always understood to be a very rough estimate.” “That number was useful and the best estimate at the time,” she told reporters last week.

The new figures give a better, if still wide-ranging, estimate of the total amount of oil now in the Gulf of Mexico. Even going by the lower estimate, a total of 17 million gallon have hemorrhaged into the water. The highest estimate would put the spill at nearly 40 million gallons so far. Either number would mean that the Gulf spill has eclipsed the Exxon Valdez, which dumped 10.8 million gallons into the Prince William Sound, as the worst oil spill in US history.