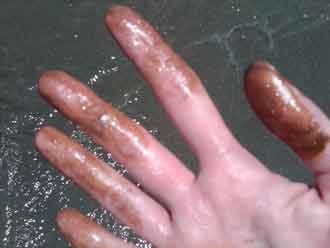 MoJo reporter Mac McClelland is getting one hell of a chilling story in Louisiana right now. This morning she headed down to the area where, according to online maps, oil from the BP fiasco was headed. Wherever she turned, she found sheriff’s deputies blocking the beach access roads—until she hit a beach at Grand Isle, and literally stepped into the mess. (Follow Mac on Twitter here.)

Here’s what unfolded in her tweetstream:

Has oil made landfall in port fourchon, LA? Can’t look, bc cops turned us around at bridge to beach. about 3 hours ago

Governor’s helicopters are flying overhead. about 1 hour ago

All these spots are blobs of oil. about 1 hour ago

Crude all over my fingers. about 1 hour ago

These vacationers say there was no oil earlier today; this shit all just started washing up, and it’s already everywhere. about 1 hour ago

This was when I realized oil arrived; when I stepped in crude. 42 minutes ago

5 sheriff’s cars have arrived. No pics allowed, no more access to elmer’s island. 27 minutes ago

The gov’s office has arrived. 10 minutes ago

Mac says the sheriff’s deputies who arrived at Grand Isle told her she couldn’t take pictures of them, but didn’t keep her away from the beach—yet. She’s headed back to New Orleans as we write, but will be back in Grand Isle later tonight. (Here’s some more background from the local media, and more pix.) UPDATE: Mac just called and noted that there are still kids on the beach, “splashing around in this huge sheen.”

This begs many questions, such as:

Why is law enforcement trying to stifle coverage of this horror? And, as our own Kate Sheppard (follow her on Twitter here) asks: Why is BP still in charge? Kate has also been following developments intensely, live tweeting the BP hearings, and breaking the latest news—ranging from concerns over these so-called chemical dispersants to the rig owner’s efforts to weasel out of responsibility. She’s covered BP’s fumbling containment efforts, its second Gulf rig, and its shameless attempts to downplay the problem: 5,000 barrels a day indeed! That’s how much BP says it is now recovering, and this thing is so far from being over.

You can keep on top of Kate’s and Mac’s dispatches on our home page, Facebook page, and by following their Twitter streams.

UPDATE: Here’s a video showing how sticky the stuff really is:

UPDATE 2: Check out these photos from Gov. Bobby Jindal’s tour of the fouled marshes.

(If you appreciate our ongoing BP coverage, please consider making a
tax-deductible donation.)