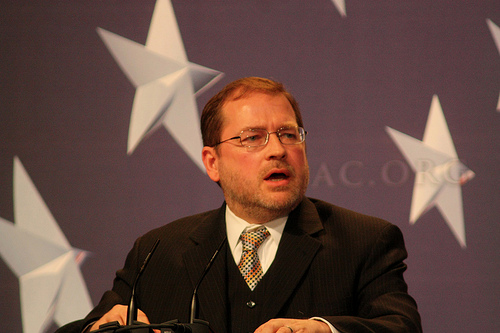 You know conservatives are running out of substantive and articulate rebuttals when they fall back on the this-bill-is-a-government-takeover meme. Today, anti-tax activist Grover Norquist shot out an email blast imaginatively titled “Stop the Government Takeover of Our Banks” urging his followers to call their respective senators and plead with them to block the main financial reform bill now being debated on Senate floor. “Sen. Dodd and the Democrats are trying to force their ‘Wall Street Bailout Bill,’ S. 3217, the Restoring American Financial Stability Act of 2010, down the throats of the American public,” Norquist’s email reads. Nevermind that the bill is not a “bailout bill,” as misinformed observers like Norquist and even lawmakers like, say, Senate Minority Leader Mitch McConnell, have said. That’s conservative scare tactic number one in Norquist’s email.

Number two: Norquist’s email goes on to say, “This bill will give the government powers to monitor and track your personal bank account transactions and all of your purchases and give that information to Wall Street and Big Businesses.” This statement refers to a proposed Office of Financial Research, an organization that would gather financial data for modeling and, according to the bill’s summary text, “monitor emerging risks to the economy” to prevent future meltdowns. The idea of an OFR has been supported by Nobel laureates, leading economists, as well as both Democratic and Republican senators. (Sen. Bob Corker (R-Tenn.), a leading GOP figure on financial reform, supports it.) Moreover, there’s no evidence—apart from the baseless claims of people like Karl Rove and Fox News host Steve Doocy—that this agency will pry into the financial data and private lives of Americans.

And number three: Finally, Norquist’s says, “This bill will make permanent the same risky lending practices that contributed to the financial collapse and create Fannie Mae 2.0.” The bill, as it looks now, will not “make permanent” the predatory abuses that precipitated the crisis—but will crack down on those practices. A proposed independent consumer protection agency, to be housed in the Federal Reserve, would focus on ending exactly these kinds of abuses, zeroing in on non-bank institutions like subprime and payday lenders and auto dealers. As for “Fannie Mae 2.0,” it’s hard to know what Norquist is even talking about here. It’s true, the bill does not, in its current form, address the issues of Fannie and Freddie Mac, the two government-backed housing corporations, even though the twins are a massive headache and played a major role in fueling the subprime bubble. But lawmakers have said they’ll take up legislation to fix the twins—that, indeed, separate legislation is needed given the size of their problems—when they’re done with the current financial reform. And if they delay, Americans will need to pressure them to make sure it gets done.

All in all, Norquist’s email shows that conservatives are running out of ways to oppose to financial reform. Instead of actually critiquing parts of the bill, they’re continuing to fabricate or fudge parts of the bill to scare people into fighting it.