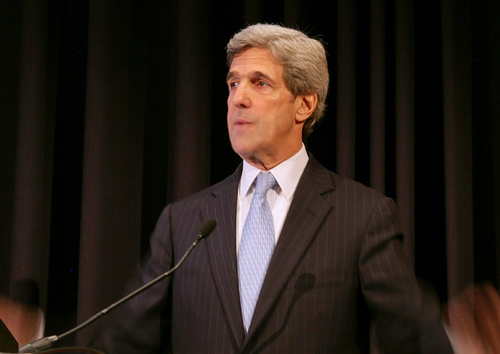 With the remains of the Deepwater Horizon rig still spewing hundreds of thousands of gallons of oil into the Gulf of Mexico unfettered, a growing group of legislators has disdain for the oil industry and apprehension about plans to expand offshore drilling. But not John Kerry, who on Wednesday praised the oil industry for working with him on climate and energy legislation, even as tensions in over what his bill may say about drilling threatens to divide Senate Democrats.

While he acknowledged that “we can’t drill and burn our way out of danger,” Kerry also spoke highly of the oil companies backing the draft legislation, which was supposed to be released last week. BP, operator of the rig currently spewing hundreds of thousands of gallons of oil into the Gulf of Mexico, was expected to be among the supporters. But that bill remains on indefinite hold amid political wrangling over the legislative calendar.

“Ironically we’ve been working very closely with some of these oil companies in the last months,” Kerry told a conference of labor and environmental groups on Wednesday. “I took them in good faith. They have worked hard with us to find a solution that meets all of our needs. I believe when we roll out a bill, ad we will will roll it out very soon, that we are going to have a unique coalition.”

Kerry also touted the process he and Sens. Joe Lieberman (I-Conn.) and Lindsey Graham (R-SC) have used to craft the bill. The trio has held extensive meetings with industry and trade groups, but most senators have yet to see a completed draft.

“A lot of colleagues of mine in the Senate were really frightened about voting for this because they were scared about what the impact might be on you and the politics of it,” he told the crowd. “Instead of going to them and trying to persuade every one of them, which we wouldn’t have been able to do … we decided to change the playing field by going to the various companies themselves and getting them to be comfortable.”

He also downplayed the possibility that a trio of coastal state Democrats may abandon the bill if it includes expanded drilling provisions. “We will not lose them,” Kerry told reporters.