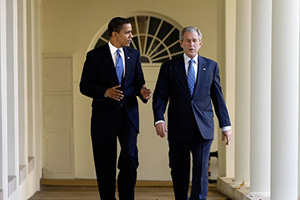 On Tuesday, President Barack Obama announced his new border security plan: He intends to dispatch 1,200 troops to the US-Mexico border and request $500 million in security funds. The move was obviously intended to deflect conservative criticism following the passage of Arizona’s harsh immigration law and to appease congressional Republicans, who have refused to support an immigration overhaul unless Obama boosted border security first. But now Obama’s latest initiative has riled up advocates on the left—some of whom are accusing the president of working straight from the Bush administration playbook.

Angela Kelley, vice president of immigration policy and advocacy at the Center for American Progress, which is headed by John Podesta—the mastermind of the Obama administration transition team—says Obama’s new border security push is “eerily reminiscent of the Bush administration.” But one key difference, Kelley observes, is that when Bush sent 6,000 troops to the border in 2006, he was also pushing for a comprehensive immigration bill that was moving through Congress—whereas Democrats have yet to introduce a comparable proposal this year, and Obama has signaled that there isn’t the political “appetite” to do so.

Mary Moreno, a spokesperson for the Center for Community Change, a liberal advocacy group, points out that Obama’s beefed-up enforcement approach can also be seen in his deportation policy. Last week, Homeland Security immigration chief John Morton vowed to ramp up deportations and crackdowns on employers who hire illegal immigrants—which are already higher under Obama than during the Bush administration. “He’s deporting more people, trying to be tougher,” says Moreno. “It’s like Bush on steroids.”

Earlier Tuesday, Obama had brought up the urgency of a bipartisan immigration overhaul during a closed-door meeting with Senate Republicans that was described by some participants as “tense” and “testy.” “He said we need to have comprehensive reform rather than secure the borders first,” Sen. John McCain (R-Ariz.) told The Hill. The president also reportedly told Republicans that he would commit greater resources to border security than his predecessor. Hours later, White House officials announced their border security plan—with no mention of a broader overhaul.

So far, Obama’s proposal doesn’t seem to have won any corresponding concessions from Republicans, who are still planning to offer their own border security amendments to an upcoming spending bill. “It’s simply not enough,” said McCain, who called for 6,000 troops to be sent to the border. Even moderates like Sen. Olympia Snowe (R-Maine) were dismissive of Obama’s promise to outdo Bush on border security. “I don’t think that’s the point,” Snowe told the Washington Post. “The point is, how much do we need to get the job done?”

On the other side, liberal critics like Rep. Raul Grijalva (D-Ariz.) also contend that Obama’s border plan doesn’t go far enough in terms of targeting gun-running, customs, and Homeland Security reforms. “It’s disappointing—the issue is much more complex,” says Grijalva. “The knee-jerk reaction of ‘troops on the border, troops on the border.’ It’s kind of like ‘drill baby drill.’ People think that there’s nothing else out there.”

Immigration reformers had long considered border security measures to be a key bargaining chip in the negotiations for a comprehensive bill. “The community heard that a bargain was struck,” says Kelley. “On the other side would be an effort to pursue reform legislation.” Moreno adds, “If there’s going to be additional security at the border, he should get something in return at the same time—not just trade it in as a possibility of cooperation.”

Ultimately, these advocates say, Obama could end up following Bush’s failed path on immigration reform—by failing to make a persuasive case for reform and letting the conservatives take over the debate. “Bush wanted comprehensive immigration reform,” says Moreno. “He thought a path to achieving that was enforcement first, and that’s all we ended up getting.”