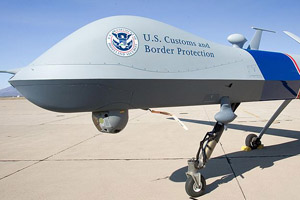 As TPM reports, Arizona governor Jan Brewer has asked President Obama to help step up border security by dispatching unmanned aerial vehicles to her state. “I would also ask you,” she writes, “as overseas operations in Iraq and Afghanistan permit, to consider wider deployment of UAVs along our nation’s southern border. I am aware of how effective these assets have become in Operations Iraqi and Enduring Freedom, and it seems UAVs operations would be ideal for border security and counter-drug missions.” For those who support Arizona’s new anti-immgrant law and want to seal the border, her request may make it sound like the feds have been saving their best surveillance toys for the battlefield. And for opponents of beefing up the border, it may sound like Brewer has a creepy vision of turning the US-Mexico border into something like the Afghanistan-Pakistan border, with death-dealing drones circling overhead.

Yet the reality is that the drones are already there. Customs and Border Protection has a small but growing fleet of UAVs that it’s been flying along the borders since the mid-2000s. It currently has six Predators (unarmed)—five of which operate from Arizona. One even crashed there in 2006. CBP credits its drones with helping bust 15,000 lbs of pot and 4,000 illegal immigrants. (And the agency hasn’t been the only one watching the line from above—in 2003, the American Border Patrol, an Arizona Minutemen-type group, tested its own small surveillance UAV, the Border Hawk.)

Whether the federal UAVs are doing a good job or whether more are needed is subject to debate. But if you want to get on the government’s case for not flying Predators in domestic airspace or for considering the idea in the first place, too late—that drone has flown.