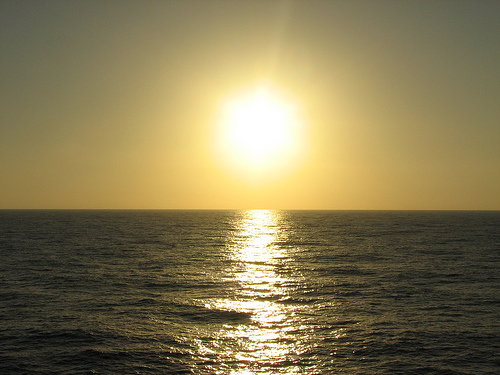 With the remains of the Deepwater Horizon rig still spewing hundreds of thousands of gallons of oil into the Gulf of Mexico every day, BP and federal response teams are scrambling for solutions. BP has bought up more than a third of the world’s supply of dispersants, or chemical substances used to break up and sink oil to prevent it from hitting land. The problem is, we don’t know what chemicals are in many of these dispersants or the impacts they may have on marine ecosystems.

On Thursday BP began using the chemical compounds to dissolve the crude oil, both on the surface and deep below, deploying an estimated 100,000 gallons. Dispersing the oil is considered one of the best ways to protect birds and keep the slick from making landfall. But the dispersants contain harmful toxins of their own and can concentrate leftover oil toxins in the water, where they can kill fish and migrate great distances.

The exact makeup of the dispersants is kept secret under competitive trade laws, but a worker safety sheet for one product, called Corexit, says it includes 2-butoxyethanol, a compound associated with headaches, vomiting and reproductive problems at high doses.

The dispersed oil tends to collect on the seabed, and eventually ends up in the food chain through shellfish and other sea life. And both the dispersants and the oil can kill fish eggs. The ProPublica piece also quotes a 2005 National Academy of Sciences report that notes that there isn’t really all that much knowledge about how oil and the dispersants affect local ecosystems:

“One of the most difficult decisions that oil spill responders and natural resource managers face during a spill is evaluating the trade-offs associated with dispersant use,” said the Academy report, titled Oil Spill Dispersants, Efficacy and Effects. “There is insufficient understanding of the fate of dispersed oil in aquatic ecosystems.”

My friend Tom Philpott summed up the situatuation quite well:

Let me get this straight. A huge oil company is pumping massive amounts of oil directly into public waters, imperiling the health of some of the globe’s most productive fisheries — as well as communities around the coast. To try to minimize the effects of the ongoing spill, the company starts dumping chemicals into that same public water. And not just a little — a third of the global supply is on hand. And we don’t have the right to know what those chemicals are? That’s a scandal.