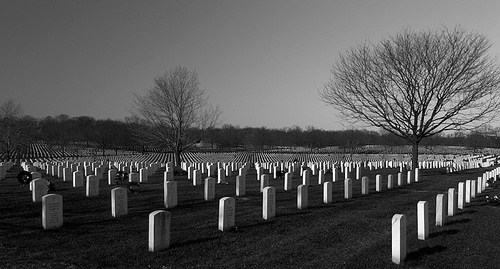 In recent years, the military has been criticized for not equipping downrange troops with enough armor and not providing disabled veterans with proper medical and mental health care. Now, the military is under fire for disrespecting its fallen at Arlington National Cemetery. Workers there misidentified or misplaced a whopping 211 bodies, Pentagon officials announced Thursday. “That all ends today,” Army Secretary John McHugh said, adding, “The majority of the findings in this report are deeply troubling and simply unacceptable.” McHugh also told reporters that the service has forced out the cemetery’s two civilian leaders and appointed a new chief.

The announcement follows a year-long investigation by Salon‘s Mark Benjamin into careless management at the cemetery, known as America’s “sacred ground.” In one instance, cemetery officials reburied the cremated remains of an unknown soldier whose urn was recovered in a dirt landfill. They also found unidentified remains in supposedly empty graves, misplaced headstones in a historic section of the cemetery, and buried one service member on top of another soldier in the same grave. Benjamin’s work, which began last summer, led to the Army investigation whose results were announced today.

“I’ve been extremely frustrated that the national media hasn’t seemed to want to touch this story with a 10-foot-pole,” Benjamin told Politics Daily today. As for the Army, he said, “Though they claim they’re trying to act in a spirit of transparency and with speed on this matter, these problems have been going on for years.”