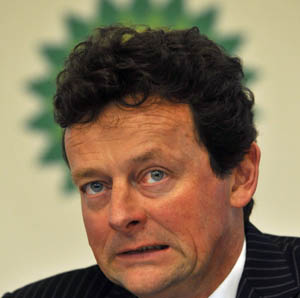 The BP oil disaster is now at day 43, and it’s still not known how much longer this gusher will continue hemorrhaging oil into the Gulf of Mexico. But one fact has become clear beyond a doubt, and that’s BP’s incompetence and irresponsibility—both before and after the spill. Because it’s getting hard to keep track of the company’s screw-ups, here’s a list of the top ten:

1. From the top hat to the top kill: In the past six weeks, it’s become obvious that BP has no idea how to fix a hole a mile below the sea. First there was the failure of the containment dome (a contraption that had to be constructed after the blast, since BP didn’t think to have one ready ahead of time). We waited for the second, smaller dome (the top-hat), which BP decided wouldn’t work either. Next came “junk shots,” in which BP unsuccessfully attempted to plug the hole with golf balls, chunks of rubber and other detritus. Then BP promised the so-called “top-kill” would be the best fix. That failed last weekend, and now BP is moving on to its next trick, another containment dome option that looks much like the others, except this method could actually increase the amount of oil leaking into the Gulf by 20 percent. And if that doesn’t work, the spill will likely continue at least through August, until a relief well can be completed.

2. Tony Hayward, PR genius: BP’s tousle-haired CEO has a remarkable penchant for saying the wrong thing at the wrong time. First, he attempted to argue that the spill was “tiny” compared to the “very big ocean.” Last week, he said he wants the spill to end because, “I would like my life back.” (Probably not as much as the 11 workers who died in the blast.) How long until this guy gets canned?

3. Dirty dispersants: In a desperate attempt to contain the growing disaster it has created in the Gulf, BP has been spreading chemical dispersants on the sea and at the spill site a mile below the surface. But BP’s dispersant of choice, Corexit, has raised concerns at the Environmental Protection Agency about its potential harmful effects on marine life—and it’s now being dumped in the Gulf in record volumes. The EPA ordered BP to find a safer option. But BP is sticking with Corexit, despite the fact that the EPA has a long list of approved, less harmful alternatives.

4. Oil? What oil?  The dispersants that BP has pumped into the Gulf prevent the oil from hitting land, where it can cover coastal critters and sensitive wetlands—not to mention cause a massive PR crisis for the oil firm. But by driving the oil under water, the dispersants are creating a different kind of environmental disaster in the sea. Independent scientists have discovered massive plumes of dispersed oil forming under the water, extending up to 22 miles long. Nevertheless, Hayward is doing his best to convince us that if we can’t see the plumes on the ocean’s surface, they can’t possibly be real.

5. Size matters: In the days following the explosion, BP tried to convince the public that only 1,000 barrels of oil were leaking into the Gulf every day. On April 29 the company reassessed that figure to 5,000 barrels, in line with an assessment from the National Oceanic and Atmospheric Administration. Now the government’s spill team says the actual figure is more likely between 12,000 and 19,000 barrels per day—and possibly as high as 25,000. It’s no surprise BP wants to play down the size of the catastrophe, as the company is likely to face penalties based on the amount of oil spilled.

6. Oppressing the press: Blocking fly-overs, barring press from beaches, sending reporters on wild-goose-chase-missions in search of the “BP liaison,” and making workers sign contracts promising not to talk to the media? Low, BP, low. And then they made it worse by bussing in hundreds of fake workers for a photo-op with President Obama. Did BP really think it could get away with these heavy-handed tactics?

7. Disastrous planning: The emergency plan BP put together for its Gulf exploration was a joke. In addition to listing animals that have never lived anywhere near the Gulf—such as sea lions and walruses—the plan lists a random Japanese home-shopping website as one of its “primary equipment providers for BP in the Gulf of Mexico Region [for] rapid deployment of spill response resources on a 24 hour, 7 days a week basis.” This document would be funny if the consequences of the company’s sloppy safety procedures weren’t so tragic.

8. Misleading Congress: Just last September, David Rainey, a vice president at BP America in charge of Gulf of Mexico exploration, appeared before the Senate Energy and Natural Resources Committee, where he assured legislators that drilling is totally safe. New technology enables “safe and reliable production” of offshore oil and gas, he said, and “any release from our operations is unacceptable” and “rare.”

9. Beyond Perfunctory: Remember when BP spent hundreds of millions of dollars on its massive “Beyond Petroleum” rebranding, in which it attempted to convince consumers that it was really devoted to clean energy investments and just happened to dabble in the oil business on the side? Too bad BP didn’t spend that money on safety measures. Or on actually moving away from oil; its investments in alternative energy have declined in recent years. In March, just weeks before the spill, BP closed down a solar plant in Maryland, one of its few investments in clean energy in the US.

10. Plus all those other accidents: If we were to list all of the disastrous exploits in BP’s recent history, this list would run a lot longer than a top 10. Here are a few of the worst hits. A 2005 explosion at the company’s Texas City refinery killed 15 workers and injured 170 others. The Occupational Safety and Health Administration fined the company $21 million for safety failures that led to that explosion, and the Department of Justice fined the company another $50 million. But even after that, the company continued to flout safety precautions—prompting OSHA to levy another $87 million fine last year. DOJ also fined BP $20 million for Clean Water Act violations stemming from a March 2006 major oil pipeline spill that dumped 200,000 gallons of oil into Alaska’s Prudhoe Bay. OSHA fined BP another $3 million just last March for safety violations at an Ohio refinery.  And since the Deepwater explosion, it’s emerged that the company cut corners and ignored warnings about the rig before the disaster, in which 11 workers died. But BP still hasn’t learned its lesson: It’s exposing clean-up workers to dangerous chemical dispersants without adequate safety equipment.