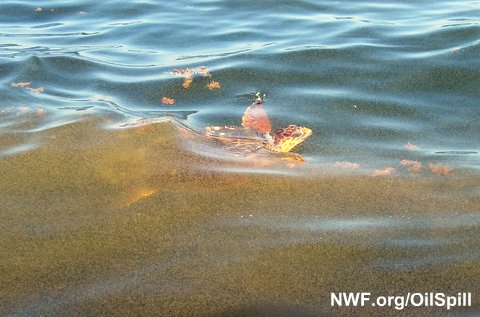 Photo used with permission from NWF.org/oilspill.

BP is apparently barring cleanup workers from sharing photos of dead animals that have washed ashore. But whether we’re seeing them or not, the bodies are starting to add up.

Late last week, the US Fish and Wildlife Service, the National Oceanic and Atmospheric Administration, and other responders issued a tally of the animals collected as of Friday in oil-impacted regions of Alabama, Florida , Louisiana, Mississippi, and Texas—dead and alive. Those stats are shocking: 444 dead birds, 222 dead sea turtles, and 24 mammals (including dolphins). I sent a request to the Unified Command office last week asking for data on wildlife collected over a normal time period, pre-oil-disaster, for comparison. I haven’t received a reply.

National Wildlife Federation senior scientist Doug Inkley has compiled some of the data on dolphins and sea turtles found stranded so far—meaning both dead and living animals that have clearly been harmed by their exposure to oil. He reports that the 244 sea turtles they found stranded by the spill is between six to nine times the average rate. The 29 stranded dolphins are between two and six times the normal rate for the region. The number of dead and dying critters, Inkley says, is “certainly higher” than usual.

But even these staggering totals might not be anywhere near the real figures. For starters, they don’t include the dead animals who may never be counted. Following the Exxon Valdez spill, scientists noted that many carcasses sunk and were never found, meaning the estimated deaths were probably far too low.

Update: A guide to the endangered animals with the greatest risk of getting oiled; photos of birds trying to breed in the spill zone; the dead wildlife we’ll never know about.