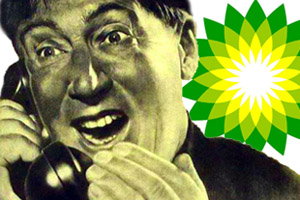 Late Wednesday night I talked to a spill worker involved in the efforts to clean up South Louisiana’s barrier islands. Let’s call him Elmer, because we spoke under condition of strict anonymity. Though he hasn’t signed one of the BP contracts that bars workers from communicating with reporters, he has been told “500 times” that if he talks, he’s fired. He certainly didn’t contact me because his politics are similar to mine. “George Bush was too liberal for me,” he explained. But: “I like the media. The country couldn’t run without it, and it’s important to have media from both the left and right.”

He also called because on Tuesday BP told me (again) that I couldn’t go to Elmer’s Island with a producer from PBS’s Need to Know because the road to it “needed more gravel.” This was a lie: “Everyone else,” Elmer said, “is driving on that road”—about 20 cars and vans going up and down a day, and the re-graveling had happened the day before we arrived. Since BP was making my job so much harder, Elmer wanted to make it a little easier.

BP’s got good reason for wanting to keep insiders like Elmer away from reporters. Elmer says that last Thursday, when the Coast Guard was announcing that the top kill seemed to be working, the cleanup supervisors on Grand Isle had already been informed it was a failure—which, of course, was not publicly announced until several days later.

And as more and more oil continues to deluge Louisiana shores, the cleanup efforts are slowing down. Workers have spent inordinate amounts of time sitting around waiting to be utilized, a frustration echoed by other workers who talked to friends of mine who were on a day trip to the beach. The workers are also upset because last Friday, many of them weren’t paid as scheduled. According to Elmer, the mostly white foremen (whom he welcomed me to picture as stereotypical gristly union-boss types) told their mostly black subordinates that they didn’t want to hear any bitching about it and that if they had a problem they could go home.

Such unpleasant work in such an unpleasant environment and for such low pay (as little as $10 an hour) is, not surprisingly, leading to superhigh attrition. Last week, there were 110 workers on Elmer’s Island. Right now, there are only 60 cleaning up the 1,700-acre home to fish, shrimp, and crab nurseries. (I called ES&H, the subcontractor running the cleanup show, for comment, but it only has one person who talks to the media, and that person was not available today.)

Elmer’s Island was already in bad shape when I was there two weeks ago, but the fire chief of nearby Grand Isle told me yesterday that a massive slick of concentrated oil had been seen just offshore. This morning, Elmer emailed me an update about the forbidden island. “I thought you might be interested to know,” he wrote, “there’s a LOT more oil out on the beach now.”

(If you appreciated Mac’s story and the rest of our BP coverage, please consider making a tax-deductible donation.)